Just trying to take a break from all the Covid-19 stuff and give you all a little enjoyment for St. Patrick’s Day. Back a number of years when I was in Ireland riding my bike, I peddled my arse to the west coast and ended up on the Dingle Peninsula. That is where I purchased the item above that depicts St. Brendan and his monks rowing their dory boat. You see St. Brendan and the monks were from a place very close to Dingle and they are famous for their explorations of the Aran Islands and westward spreading the gospel. Read Tim Severin’s book ” The Brendan Voyage” for a fascinating account of their voyages. It is said that they made it all the way to Newfoundland 500 years before Leif Erikson and close to 1000 years before Columbus made his way to the Caribbean. National Geographic also did a piece in August of 1977 reporting on Severin’s re-creation of the voyage outlined in the book. My point today is that St. Brendan and the boys were not much into social distancing. In fact they went way out of their way to spread the gospel and also meet new people and visit new lands on the way. The Irish are like that.

St. Patrick’s Day is a celebration of what the saint did in Ireland as a Christian missionary and bishop. It also celebrates Irish culture with parades, Guiness, Irish Car Bombs, and similar merriment but also recognizes the social character of the Irish and their descendants like me. 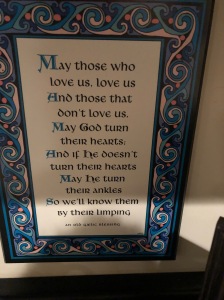 My mother was a huge fan of the day and also a huge fan of all things Irish. Her humor was represented in sayings like the above and also in her love for things like Belleek china, Waterford crystal and making Irish soda bread. 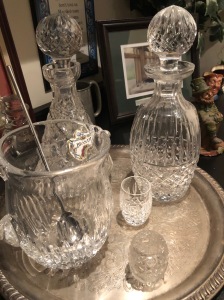 But again- it involved people, and our house growing up had that classic Irish tradition of gathering friends and family and enjoying the humor and the company. I spent many times on the piano in my folk’s house playing Irish songs and to this day do the same at home.

My mom’s favorite saying was that “happiness is like a perfume, you can’t spread it on others without getting a little on yourself.” And she did in many ways- cooking, singing, entertaining her friends and relatives, and well…….being Irish. I believe I received her sense of humor as a gift because I always try to look at life from the bright side. If I can offer some humor to my friends and family along the way, I feel good and I hope they do as well. I tell my inane stories of my experiences on the chairlift and on mountain bike rides, much to the amusement of my friends who have graciously heard the stories over and over again. But I believe that a little self deprecation, which is the root of many of my stories, leads to belly laughs and people shaking their heads and saying………..McCloskey???????” 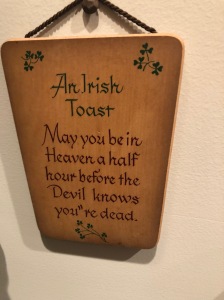 So this Tuesday is St. Patrick’s Day. Yes- we are in the middle of a national crisis. The parades have all been cancelled, restaurants are closing, bars are closing, we are encouraged to be diligent and wash our hands and keep our distance. Not in the Irish tradition at all. But we need to do it. But when the day comes, and you have “The Quiet Man” on television or maybe “Waking Ned Devine” , think of the folks that you would like to be with and give them a call or a text. Have a laugh and try to keep some humor during some trying times. 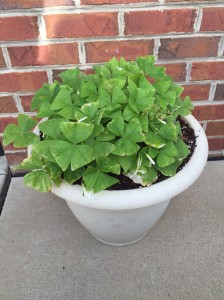 I will probably do that and bore people with more stories and corny Irish jokes, but they will laugh and say- ” thanks for the call man”.        Slainte’ .