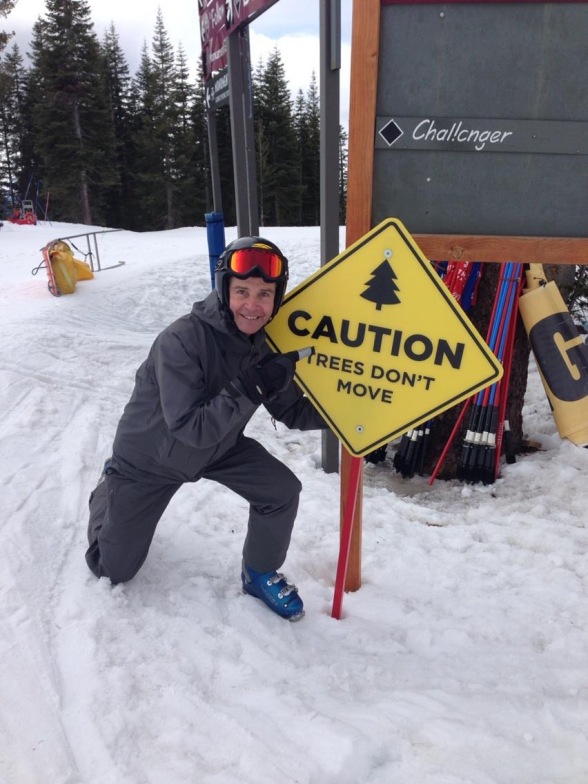 So the other day, someone asked me what was the most interesting ski lesson that I have ever taught. I thought about it for a while and said, ” Well, aside from the time I taught a blind nun with a colostomy, or a blind Hell’s Angel from Chicago, I guess it was the Euros in Kuhtai in the Austrian Tyrol. I was there with Mark Singleton and Kenny Griffin representing Western Pa. in an event that the Austrian government called ” Ski Happyning.” We were selected by PSIA( Professional Ski Instructors of America) to represent our region along with a group from all over the U.S. One week of touring and one week actually placed with a ski school in an area in Austria. We were selected to go to Kuhtai, a little hamlet high up in the Austrian Alps. The ski school director picked us up and drove like a mad man through the night up these twisty mountain roads that led to the ski area. There he placed us in the hotel for the night and told us he would see us in the morning to shadow his instructors and their lessons for the week. You see, in Austria, tourists come to ski for the week and part of the package is a mandatory session each day with the ski school. It is tradition as well as something that the patrons of the resort look forward to each year when they take their winter vacations.

Late that night, the road was covered with an avalanche and the instructors who lived in the town below were unable to get to Kuhtai to teach their lessons. So the three amigos from Pennsylvania went from being the guests to the employees in a real hurry. The ski school director came to us and explained the situation and said, ” Do the best that you can, but you guys are being put to work.” He was a bit of an iron ass anyhow so it was not surprising that he was discouraged that a trio of apple cheeked American yahoos would be teaching his clients.

After some of the local instructors took the beginners, we were given our groups and off I went with a group of Austrian ladies who were none too pleased to be with the American, instead of their usual handsome Austrian blonde ski god. I did the best that I could seeing that I spoke little German and mostly had to communicate with physical instructions on what I wanted to accomplish. I showed them the PSIA certified technique of a wider stance and they were having none of that. They shook their heads “no” and said for me to go ahead of them and guide them down the slope. As I looked back, they had their feet glued together in standard,Arlberg, counter rotated, form at the time, and saw no reason to try a more athletic approach to stance which would enhance their turning and balance on the hill. It was quite a challenge to try to show them the wisdom of separating their feet but again, no way they were buying it. At the end of the day, they were all smiles because I had basically guided them all day which was a minor miracle in itself seeing that I had never skied the area and relied on a map and their instructions as to our direction. They bought me a beer at the end of the day and we had a few laughs in the bar, not understanding any of the conversation. I know that most Europeans speak English from my prior experience, but they held that from me with giggles and glances.

Regrouping with Kenny and Mark at the end of the day, we all had similar experiences and to have a challenge like that with a language barrier was almost as daunting as my experience teaching visually impaired individuals. 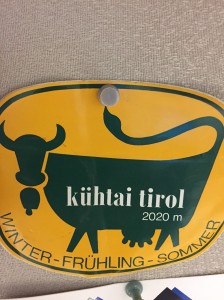 Taking us back down the mountain road at the end of the week, the ski school director thanked us in his limited English and as we left his van, he handed me their ski school banner which you see above. It hangs on my baker’s rack in the basement as a reminder of a wonderful time in Austria and a most challenging ski lesson.

Kind of reminds me that I need to get back to Europe to ski again. It has been a long time and the atmosphere and the history of the sport over there is well worth the effort. Think snow and thanks for reading.

In the ski industry, our region is known as the “Banana Belt”. Any winter weather expectations are tempered below the New England, New York State line and those of us who long for winter weather experiences so that we can enjoy our winter sports here in Pennsylvania, have it tough sometimes. The only salve for these wounds of expectation is the hope that the weather will turn locally,focusing on our planned ski trips up north and out west, and………watching ski racing on television. I have always been a fan of ski racing because coming from an instructor background, racing shows the ultimate technique required to make a ski turn efficiently. I make an effort to watch NBC Sports, NBC Sports Network, Universal Sports and use the DVR function to watch turns in slow motion to see if there is anything I can glean from watching the world’s best racers.

I made efforts in past years to watch ski racing up close and personal, climbing up the sides of courses to see exactly how world class racers maneuver their way through combinations in slalom, as well as see their lines in GS and the Downhill. I remember watching Perrine Pelen race slalom at Waterville Valley back in 1982. Perrine was an Olympic silver and bronze medalist in slalom, and giant slalom, and won a gold in slalom at the World Championships. I looked at that combination where I was standing and imagined myself going through that particular section of the course.. When Perrine came rocketing through, it was almost too fast to see exactly what she was doing. Any expectation that I had was completely blown away by her world class technique and speed. It was hard to relate. I needed that slow motion function.

French skier Perrine Pelen smiles as she shows her two Olympic medals, 18 February 1984 in Sarajevo, at the Winter Olympic Games. Pelen won the silver medal in the slalom, 17 February, and the bronze medal in the giant slalom, 13 February. AFP PHOTO (Photo credit should read STAFF/AFP/Getty Images)

and we had a nice discussion with her on the finer points of racing and what her experiences were at the World Cup level. A number of years ago, I had the great experience of being with a group of instructors at an event called “Ski Happyning” in Austria and witnessed the Super Bowl of ski races- the Hahnenkamm. The speed and the treachery of that course was impressive and I learned quickly the value of sharpened edges when I skied the Streif the next day.

Fast forward, I saw our current slalom star, Mikaela Shiffrin, race in the U.S. Nationals at Squaw Valley two years ago and have watched her career with interest. https://www.youtube.com/watch?v=4RyIpHiHBVA&list=PLiDVMRUU2yRQzbDx3HfH1eHpF86W2tmOG&sns=em

Last weekend, I watched her impressive win in slalom at Killington on NBC. It was the first time in 25 years that the World Cup was on the East Coast and the crowds were huge.It was not only interesting watching her win in front of thousands of fans, but more importantly in front of her 95 year old grandmother who had never seen her race live.

Mikaela is not only extremely confident, but her turns are executed flawlessly. Her timing is perfect as she pressures the skis through a turn and quickly sets up for the next turn high above the next gate. She is never late and as it stands now, she is in a league of her own beating the other ladies by seconds which is light years in ski racing. Her balance is unmatched as she stands perfectly on the skis all the way through the turn. It is really fun to watch.

All in all, you can learn a lot from watching any sport executed by the world’s best. Golfers are always watching the swings of the Tour players and trying to emulate what they do correctly. It is the same with skiing. We watch and learn from skiers like Shiffrin, and see what they do especially when you can see it in slow motion. So, as I wait for the snow and placate myself with muddy mountain bike rides at night or on above frigid weekend days, I hope for the best. The equipment is sitting there waiting, the trips are planned, all we need are the HKD guns to start blasting locally and with a little luck from mother nature, maybe just maybe, we can apply what we learn from watching before Christmas. Think snow, even if you don’t ski or like winter…..it is beautiful to see. A landscape that is blanketed in snow is a visual wonder. Thanks for reading.