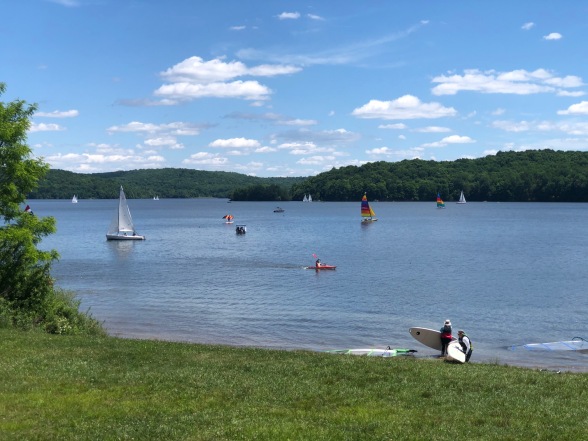 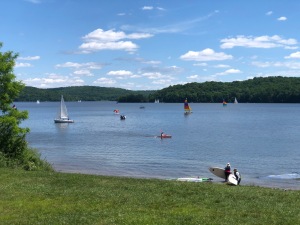 Janet and I had a nice bicycle ride this weekend up at Lake Arthur. As we sat on a bench and looked at the nice scene you see above, we admired the skill of the sailors who were piloting their sailboats, catamarans, and wind surfers. We observed some folks attempting to wind surf who had elementary skills and after a while, we realized that wind surfing is harder than it looks. Probably not unlike a lot of things with a steep learning curve until you get the hang of it. As my mind drifted in the hot sun and pleasant scenery, I went back to my earlier adventures in life, trying to pilot water craft. Not too successful. 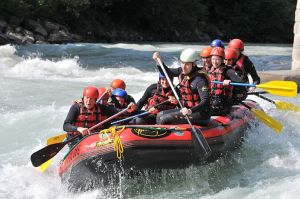 Now I had always gone on whitewater rafting trips on the Yough and Gauley Rivers around here, but always had been a passenger and did what the guide told us to do. Kind of fun but basically along for the ride. One day, my father in law thought it would be a good idea to do the Youghiogheny River with my mother in law and my wife. He ended up in a raft with some other guys and I had my own raft with my mother in law and Janet. They looked at me skeptically when I said I knew what I was doing and we pushed off and paddled downstream with a look of excitement and wonder as the whitecaps began to lap up against the raft. We were doing fine until we came to the famous Dimple Rock which has been the demise of many canoes and water craft with a tough eddy current up against the rock and a designated route around it outlined by the outfitters at the beginning of the trip. I saw a bent canoe hanging from the rocks on the left bank and knew that we were approaching the challenge. I told my mother in law and my wife to keep paddling and I would try to steer us in the recommended direction of the current. Unfortunately, we zigged where we should have zagged and somehow I managed to get the raft out of the current and basically in the direction we wanted to go. And then the unthinkable for my MIL and my wife. I flipped out of the back of the raft and was on my back floating down “Swimmers Rapids” trying to hail them down. My wife apparently kept paddling with my MIL and then after a while of no response to questions like ” where do we go now?”, they realized that I was not in the raft. Janet screamed at her mom and said, ” He’s not here.” To which the MIL responded” Oh get out, you don’t know what you are talking about.” She then looked back and the two ladies were on their own.

After a little while, I managed to float alongside the raft and after a barrage of questions, I said, ” I will see you in a mile at the end of these rapids.” I have no problem swimming but piloting a craft is not my strong suit. We all had a laugh about that one for years. 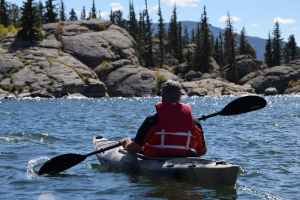 Another foray in into the world of water craft was when I decided one year that I would like to take up kayaking on the Yough. I took a continuing education class at Pitt with outings in a swimming pool trying to roll the kayak without getting out. A necessary skill when actually kayaking on a river or stream. I never was good at that and on the field trip to the Yough as our final outing, I put on a rain suit to try to keep myself dry. Little did I know that was a worthless endeavor seeing that I was out of the kayak more than I was in it and to make matters worse, the outing was in October and it was snowing on the river. Cold is not the word for it. Something much worse, and I was never so glad to rid myself of that kayak and tell myself that the idea of being a river rat or a granola crunching paddler hanging out in Ohiopyle, Pa was not my fate. My old ski buddy, Mark Singleton, who is now the Executive Director of American Whitewater, would not be proud of me and maybe welcome me back on the river for some lessons and maybe some redemption. But any trip to North Carolina to visit him would be on two knobby tires on trails and not on the river rapids of the south.

I had a few close calls on the water that were not my fault. One was on a boat offshore at Martha’s Vineyard where a friend of my in-laws, piloting the boat, went down into the hold to get some nautical maps I believe, and we were drifting precariously close to a large buoy. I was just about to grab the wheel when the guy came up, screamed, ” Holy S@#$”, and then just avoided what would have been a bad collision seeing that the base of the buoy was made of concrete. I can just see it now, all of us hanging on the buoy waiting for the Coast Guard as the boat would have surely sunk. The second was on the river here on a party boat with a bunch of ex football players. The weight in that boat had us very close to the water surface and I looked at my one friend and said, ” make sure you have your wallet and car keys within reach because when this thing sinks, we need to be ready to swim to shore and have our belongings” Fortunately, we were able to get off the boat before a collision with another boat and a close call with the walls of a lock on the river.

My mind drifted back as Janet said, ” time to go.” As we mounted our bikes, I took a final look at the sailboats, wind surfers, and other pilots of the water and said to myself, ” that is not for me, but it is nice to watch.” I will be a spectator for sure. Thanks for reading but don’t let me dismay you. If you want to try something new, go for it. It would be cool to know how to do it.