This is my friend Mike Smith who I have profiled before in my posts. He owns a marina up on Lake George and every year, we ski together at Gore Mountain and Whiteface up in the Adirondacks.

For a review, Mike has jumped over 2200 times out of an airplane, he pilots his own plane and has flown open cockpit planes in the past with the leather helmet and goggles doing aerial acrobatics over Lake George to the delight of his neighbors and kids from the Hole in the Wall camp. He is also a strong skier whose lifestyle is gas pedal to the floor.

I first met Mike years ago at Laurel Mountain in Pennsylvania where he worked as the mountain manager. He then went on to work for Herman Dupre at Seven Springs as the mountain manager there and then took a job with several grooming vehicle companies eventually settling down with the marina. During the time of his sales career with the companies who make the groomers for the ski resorts, Mike visited a lot of areas in New England as well as out west. He ended up skiing at many of them with the mountain managers and would always call me and say, ” Hey McCloskey- are you working today?” To which I would respond in the affirmative and he would laugh yelling through the phone what great conditions he was having and how he was racking up more ski areas than I had at the time. You see, we have this 40 year old competition to see how many different ski areas we have officially visited and skied. We wrote them down one night over beers at the Algonquin on Lake George and ever since then, we have had this competition to see who is ahead.

For documentation purposes, the areas visited have been in New England, New York State, Pennsylvania, West Virginia, Virginia,New Jersey, Colorado, Utah, Idaho, Wyoming, California,Nevada,New Mexico,Michigan, Oregon, Washington, Canada, Austria, Switzerland and Germany. Never made it to South America or Australia or New Zealand but they are on the bucket list.

There are rules though which govern this competition:
You must officially have a lift ticket and take at least one run.
The tally must be for different ski areas- no credit is given for multiple visits to any ski area.
The only exception was Tuckerman Ravine which has no lifts. We hiked and skied there many times.

I remember one year passing the Donner Ranch Ski Area in Tahoe and my friends all wanted me to stop and hike up to take one run to rack up another area on Smith. They know all about this competition.

The area was closed for the day and I reminded them of the rules. Smith and I would go back and forth with phone calls when each of us visited another area that we could add to our list. I delighted in calling him and he the same. In fact, when we ski together, his comment is that he knew he was making me mad when he called me daily on a visit to a new ski area. I laughed about it but you know, he was right. He did irk me when he would call on a daily basis while I was strapped to my desk. Jagoff!

I was behind for many years but eventually caught up to him and now have surpassed him because he is out of the grooming business and he skis mostly areas that he has skied before. However, I make it my business to continue the competition and when I visit a ski area, I always look for another place to get my tally ahead. My last addition was Homewood in Lake Tahoe which has beautiful views of the lake and advanced me to 108 different ski areas visited and skied in my life.

One of my observations about ski areas is that smaller, family owned areas seem to have more of an appeal than the large corporate giants. The spirit of skiing is alive in the hard work and effort it takes to keep a small area running. The ambiance of a little area in Vermont or New Hampshire with roaring wood fires in the lodges and rustic architecture, to me is more appealing than the concrete behemoths that are the norm for lodges in the corporately owned areas. High speed chairlifts are not always the panacea for the skier. Sometimes those slow lifts add to the atmosphere and allow for conversation between runs. I like that. Sure, I like to rack up vertical with high speed lifts, but there is nothing wrong with the smaller areas and their fixed grips and surface lifts. Kind of reminds you of how skiing was in the old days. Single chairs are a classic a la Mad River Glen.

So, 108 different ski areas skied and visited is a pretty good achievement but before I puff out my chest too big, one final note. I met Ogden Nutting a few years ago who is the patriarch of the Nutting Newspaper empire which currently owns the Pittsburgh Pirates and Seven Springs Ski Area, Hidden Valley Ski Area, and manages Laurel Mountain on State property.

Mr. Nutting has the unofficial record of 475 different areas visited in his lifetime. This was written up in Ski Magazine. I sheepishly boasted about my 108 but enthusiastically voiced my admiration for his achievement. He said, “my boy( I was 59),you have a lot of years left.” So, lets hope I can continue to accumulate visits to different areas. I have trips planned for this year, but if I spot an opportunity to take at least one run at some place where I have never been, I will do it. I need to keep my foot on Smith’s neck like a true hard core competitor. LOL. Thanks for reading and think snow. 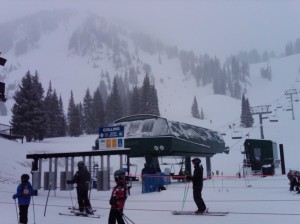 10 thoughts on “The 40 Year Competition”