Well, the leaves are starting to change and the nights are becoming cool.Football season has returned to Western Pennsylvania and the beloved Pittsburgh Steelers are 2-0 so far and things are looking good. This brings back some memories for me which include an icon of American broadcasting. Please review the following link before you move on here. https://youtu.be/IdjYFleXNro Myron Cope was a real character whose background as a sports journalist was extensive. He became the voice of the Steelers on radio broadcasts with Bill Hillgrove for many years and entertained us with his antics and his quirky voice which you hear in the video. I always liked Myron and his commentary and in fact had an interesting interlude with him back in the day. 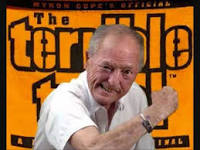 As many of you know, the Terrible Towel, waved frantically by Steeler fans, was created by Myron and all the proceeds have been donated to his foundation for many years. The Towel has been copied by other sports teams but the original Terrible Towel is first and foremost a Pittsburgh thing and we are most proud to wave it to encourage the performance of our Steelers in crucial game situations. 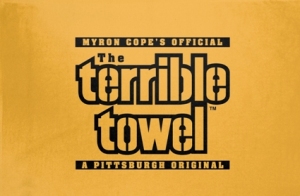 A while back, I was booked on a CMH Heli-Ski trip to the Bobbie Burns Range in British Columbia with some friends from our local ski area. As it turned out, our Steelers were in the Super Bowl at this time and we wanted to somehow honor them and show our pride to the other groups who would be staying with us up in BC. I brought a Terrible Towel with me and we had our guide take a picture of all of us with the Towel on the summit of one of the peaks where we would be skiing. 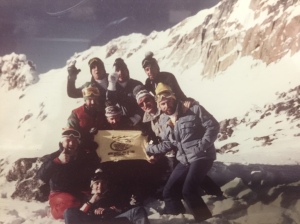 I had some copies made when we returned and I sent one of them to Myron Cope with a note saying that we did our part to cheer on the Steelers in a remote location of North America. I felt good about doing that and had some internal chuckles along the way thinking about what Myron would think of the picture. One day, while sitting at my desk, I got a phone call and picked up the receiver and much to my surprise the voice on the other end said,” Is this Pat McClozzzzzzzzzgey?” I said yes it is and the voice continued with ” This is Myron Cope.” ” I found your number and wanted to give you a call to tell you that your picture is hanging on my office wall between the guys with the Towel at the South Pole and the guys with the Towel at the Great Wall of China” I was thrilled and said that I was so happy to send it to him and really thanked him for the phone call. He said it was his pleasure and that he really appreciated the gesture and went on to relate to me all the places where the Towel had been and how many pictures he had with the Towel in locations all over the world. He gave me a few ” Ummm Haaaaas.” and some gutteral “Ls” in his language. Like ” LLLLLLLLLLLambert is the best LLLLLLLLLLLinebacker in the LLLLLLLLLeague.” But his sincerity in calling me was most appreciated. I have heard a lot of good things about Myron over the years and how benevolent he was with local charities. We miss him in Pittsburgh and his cheery enthusiasm will long be remembered by Steeler fans for many years. We are proud of the Black and Gold here and Myron generated a lot of that enthusiasm. Wave that Towel, Steeler Nation, – wherever you are in the country. Thanks for reading.