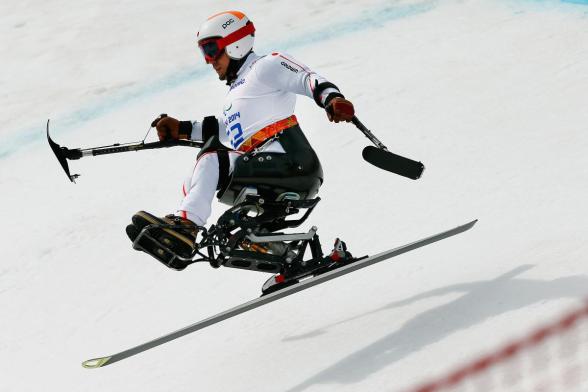 Recently I have been thinking about how things can change in life. How circumstances can alter your course. I was thinking about my days back at Allegheny College and how I was almost oblivious to what could have happened. I was on the young side of the Vietnam generation but if that war had continued on for one more year, I may have been plucked out of Meadville and sent to destinations unknown in the far east. I had a #11 draft number and although the war was over, we still had to register. But it was not until many years later that I thought about what might have happened had the war continued. I have a lot of respect for the men who enlisted or were drafted into service and still do today. I also have a lot of respect for the wounded warriors who forge on in life even after life altering events.

Fast forward, I had the opportunity to meet some of the members of the U.S Disabled Ski Team a number of years ago at an event sponsored by Harmarville Rehabilitation. Several of these highly skilled skiers had injuries as a result of motorcycle accidents and other assorted catastrophic incidents. But many of these skiers were former U.S Military servicemen who had lost limbs as a result of I.E.D attacks in Iraq and Afghanistan. Paralysis and or missing limbs did not keep these guys from pursuing athletic achievement and it was never so evident as that day when their skills were on display.

The equipment that was used varied from outrigger ski poles as seen in the photo above to sleds that housed the skier with one ski attached to the bottom of the sled with a motorcycle shock. It was amazing to see these guys ski and also self-load on the chair lift. They needed no assistance as they unlocked the shock, hunched up when the chair came behind them and then attached a safety carabiner and safety cable to the chair lift on the way up. Truthfully, they can ski with anyone and their skill was amazing.

Lunchtime was a real visual as I sat and talked with these guys as they removed their prostheses and set them aside. Ski boots with the prostheses inserted covered with ski area stickers was actually kind of amusing. It showed the relaxed attitude that enabled them to understand their condition,yet continue to strive to ski better with confidence. Several of the ski team members had competed in the Para Winter Olympics and other international ski races for the disabled. They were a great inspiration that day not only to the general skiing public, but also to a group of visually impaired skiers that I had with me. I will never forget one of the ski team guys asking me to show him how to guide a blind skier. After about an hour session, he asked if he could guide one of the visually impaired skiers and we selected a guy who was not only blind but a paraplegic as well. To see the U.S Disabled Ski Team member in his sled, guiding a blind skier in his sled, stopped many onlookers in their tracks. The two sleds made their way down the mountain and it was truly a spectacle. The guys had the opportunity to guide several other visually impaired skiers and at the end of the day, I was totally blown away by what had happened and the success of the day with Harmarville Rehab. Visually impaired skiers, skiers with one ski and outriggers, skiers with sleds and outriggers, truly a heartwarming event.

I spent 34 years with visually impaired skiers and believe me when I tell you, I got more out of it than they did. These people are truly remarkable and their “can do” attitude should be a lesson to all of us. The guys in the sleds that day were inspirational as well and every time I see a disabled skier on the slopes in my ski travels, I make a point to talk to them and encourage them to show the rest of us how positivity can win the day. An uplifting message to all of us. Thanks for reading and think snow!!