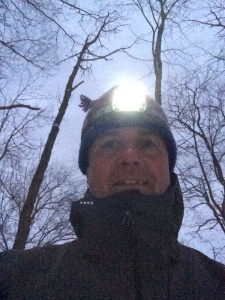 This time of year, I kind of switch gears and get away from the mountain bike, and transition to skiing,running trails, or hauling out the snowshoes. I have always been a runner at night in the winter and it is a solitary pursuit whether running around the lake in our local park, or running trails. 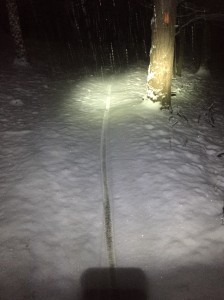 I am not anti-social this time of year, but it is nice to go out at night with the headlamp and spend some time by myself. I enjoy my own company. I talk to myself. Sometimes I get answers. It gives me time to think and to enjoy the winter weather. There is nothing like a run with the softly falling snow accompanied by my Pandora Christmas selections on the I-Phone. In the old days, it was the Sony Walkman with tapes. But I move ahead with technology- kicking and screaming. 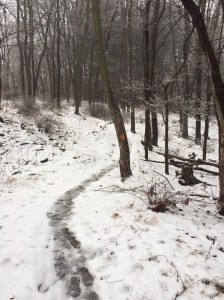 There were many nights that I had the chance to contemplate Christmas and the true meaning of the birth of Christ. I always had fond memories of nativity scenes or the “creche” because of a wonderful story that I watched as a kid- ” Amahl and the Night Visitors.” 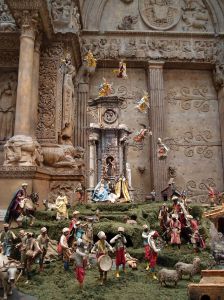 It was re-broadcasted in 1963 from its original 1951 production on the Hallmark Hall of Fame. Although the story is fictional with the shepherd boy and the Magi, the opera by Carlo Menotti was based on biblical truth. I was always fascinated with that production on TV and thought of it often when I would see a creche. Perhaps one of my favorite nativity scene locations was in the grove right near my run starting point at Stone Field in North Park. It was always nice to finish a run and walk up to the grove which was decorated by Allegheny County Parks and Recreation. The star was perched at the apex of the roof of the grove and the floor was coated with hay and the walls lined with hay bales. The Magi, the shepherds, the angels all were present with Mary, Joseph and the baby Jesus. A brilliant display especially on cold, snowy, winter nights around Christmas time.

Looking at that scene at the end of a run was comforting to me and I noticed a lot of other runners, walkers, and hikers in the park making the trek up through the field to the grove. Children were amazed and even the dogs seemed to be silent in reverence to the serene scene in our county’s largest park. It has been several years since that nativity scene or creche has been present in that grove. As we all know, there is controversy about separation of church and state and due to nationally recognized litigation, the grove is now an empty, silent, space this time of year. 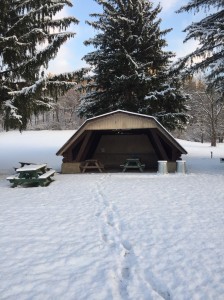 Now I am not one to get political or controversial on my blog at all. I also hold any opinions to myself on Facebook posts. But I must say that I miss that creche in the park and the wonderful job that the County did on the presentation each year in that grove. I also believe there are many people who feel the same way as I do. We miss it – that’s all. We are not here to debate the first amendment but rather reminisce on the nice feeling that was present on those winter nights at the end of a solitary, contemplative run. Christmas has many meanings to different people. For me it is a celebration of my faith and the wondrous miracle that took place 2000 years ago. I never see the creche as a graven image, but rather a reminder of the humility of Christ as He came among us.

So, I continue to run, in the solitary darkness. I watched the space shuttle soar overhead last night in the presence of hundreds of stars that can be seen from the darkness of our beautiful county park. For those of you who celebrate Christmas, I wish you a blessed time with your family and friends. Enjoy the season and thanks for reading. 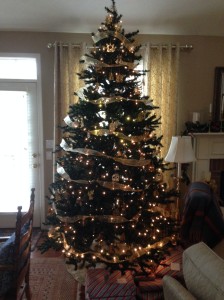 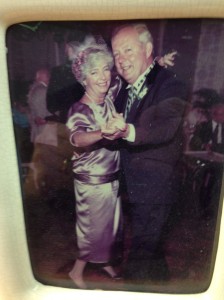 I had to take time out from my outdoor posts to tell you about the “A” Team which were my parents and their friends, especially at this time of year. My house growing up was always filled with people and my folks were the consumate entertainers. My mom was a wonderful cook and my dad was a great provider and helpful sidekick to my mom’s entertainment skills. When they built the house in Wexford, they upped the ante a bit and built a swimming pool which took the daily party to another level. A lot of people spent weekends and holidays at my parents home and it was not unusual for me to wake up and see a guy in a tux having a Bloody Mary after my mom had invited him to breakfast after a big night on the town. My mom sang with the orchestras at the parties at the University Club and Shannopin Country Club and usually made friends with some of the musicians. The party usually continued after hours with some strays eventually making their way to our house.

The big party every year was the annual Christmas Party. It started when I was a young lad at our house on Siebert Road. The preparations were amazing with the cooking, cleaning, stops at the liquor store, beer distributor, and bakery. This began weeks in advance of the party and it was all hands on deck. The first shift on Christmas Eve was usually the McCloskey clan with my aunt and uncle and my cousins. They came early and enjoyed themselves and when they left, the cleaning and regrouping began in earnest in anticipation of the arrival of my maternal grandparents and a steady stream of my mom’s relatives and their friends. I assumed the role of piano player, dishwasher, bar re-stocker and general cleanup guy along with my sister who had a habit of getting dishpan diarrhea and disappearing during the brutal pot washing scenes. Sally Rose, my mom’s good friend, assisted us with this role and it was amazing to see how many times the same pot came back to be cleaned again. Some real characters came to our house during this annual soire’ including one of my dad’s friends who had a habit of coming overserved and fell into the Christmas Tree. The party would not be the same if he did not make this spendid grand entrance. My dad made a hell of an egg nog which annihilated people after a couple of cups including my mother’s cousin who I always caught trying to put his ignition key into the side window of his car. I gently escorted him back to the house and eventually always took him home.

The house in Wexford was where the party began to get rather large because of my mother’s benevolence. It was a good thing that I learned to make a good Manhattan at age 10 and generally knew my way around bar service at our house. I assisted the bar tenders during off shifts at the piano and when I look at that piano today in my living room, I wonder how many Manhattans, beers, gin and tonics, and other alcoholic beveages have been spilled in the keys over the years. ” Play White Christmas…damn it” was a usual request as the liquid came cascading over my fingers and into the keyboards. The egg nog was rather sticky but I soldiered through and probably logged more hours than I care to remember keeping the music going at the party. If there ever was a Patrick Dennis it was me and my mom was surely Auntie Mame. I accompanied her on the piano and it was always a welcomed respite from the rather off key carols that resonated in our living room. I knew the party was eventually getting out of hand over the years when one guy who was a son of one of my folk’s casual friends pushed me out of the way going to the bar to get a drink. ” Who the hell are you?” he slurred. I expained who I was and introduced myself. He almost fell into me apologizing and telling me what a great party it was. He was a bit of a close talker and based upon his alcohol consumption, my face probably would have not passed a sobriety test after our conversation.

Usually the last of the revelers left at about 4:00 AM and after a huge day of entertainment, my sister and I sat down and looked at each other and said,” Well- 364 days until we do it all over again. My mom,” Christmas Carol” loved the holidays and even though the party was a collossal family effort, it was always fun and everyone had a great time. My folks invited a lot of people who had personal troubles, financial troubles, no one to celebrate the holidays with, and other various things that make Christmas a sad affair for some. My mom always remembered them and oftentimes they said to her that the party was the highlight of their Christmas. My folks were always generous and exhibited that wonderful Christmas spirit of giving and of love. After all, isn’t that what Christmas is all about anyhow? As I think back, my parent’s house was always an oasis for friends and especially friends who needed a friend. My mom always had two great sayings. ” Happiness is like a perfume, you can’t sprinkle on others without getting a little on yourself.” ” To have a friend is to be a friend.” Christmas Carol and her rather large benevolent elf- my dad, alway knew the meaning of being a friend. Perhaps that is why the Christmas party was always a hit. People liked to be with my folks.

Years have passed. My folks and most of their friends are gone. But when I go to that piano in my house in the quiet times, the Christmas Carols that come out of that old spinet bring me back to the days of Christmas past. Lots of hours have been logged on that piano and I keep it going for Janet, Jack and my in-laws. I get the keys rolling for our friends too but to date, none of them have ever fallen into our tree. Must be because we are not……………”The A Team.” Thanks for reading and have a wonderful and blessed Christmas and Holiday Season.