Every time I see a flower, I think of my dad.Whether it is at the shore with the landscaping that captures my eye, or Phipps Conservatory, or the mountain laurel I see on my mountain bike rides in the Laurel Highlands, I think of my dad. For as long as I can remember, my dad had a passion for growing flowers. In our basement on Siebert Road, he would have racks set up in our basement with trays of seedlings growing under artificial light. I can remember him patiently planting his Burpee seeds into the little pots filled with potting soil and vermiculite and watering carefully with MiracleGro until it was time to take the trays outside in the spring and plant his flower beds. Never did he plant anything before Memorial Day because of potential frost, but the basement was overcrowded with trays and trays of flowers grown all winter from seed. 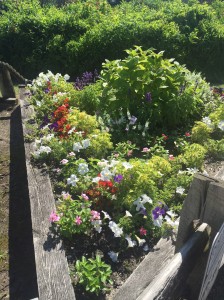 Being an engineer, he designed an interesting tool that consisted of a simple electric drill, a special drill bit, and a long auger. When it came time to plant, it was always a weekend affair where I would be on my hands and knees filling the drilled holes in the flower beds with a specifically instructed lineup of flora. Allyssum was the delicate front row of the beds followed by yellow and orange miniature marigolds, backed up by geraniums, and finished with petunias and giant marigolds. This was the annual lineup of planting and as the years went on, the volume of flowers increased. His hanging baskets would burst with color and the weight of the growth would strain the very chain on which they were hung. The same meticulous lineup appeared in the hanging baskets and half barrels supported by large clay pots. Marigolds, geraniums, allyssum, and petunias always made up the pots and baskets with vining lantana that eventually cascaded out of the baskets and pots onto the ground. Watering with MiracleGro was the secret to healthy flowers and my dad used boxes and boxes of this plant food all summer long.

I was always the cheap labor- again, strong back weak mind that assisted with the planting weekend as well as taking care of the watering duties when my folks were away. When we moved to Wexford, my dad built a Lord and Burnham greenhouse where he really stepped it up. My duties as the watering guy were carefully explained to me with different nozzles for different trays of flowers but this is where I was different from my dad. My dad had patience where I was always anxious to get to some event and was always in a hurry. I would run into the greenhouse when the folks were away and hose the hell out of that greenhouse with the first spray nozzle I could find. I was careful not to break any seedlings for fear of ruining all of my dad’s meticulous and careful planting, but I did not take the time that he did switching nozzles to match the delicateness of the plants in his care. It was amazing to me to see his patience in the winter down in that greenhouse. The snow gently falling on the roof with my dad inside carefully watering each plant, in each little pot, in rows and rows of trays with suspended artificial lighting.

There were setbacks along the way and things were not always….”rosy”. Like the time that my dad planted tulips that bloomed like a Dutch garden in the spring. For one day, all the tulips radiated gorgeous color in the sunshine and the next morning they blooms were all gone due to the feasting of the local deer population. I rarely saw my dad angry but that morning, he was ready to strangle the deer bare handed. Another time, he was away and asked if I would carefully pinch off the dead blooms from the daffodils that he planted and I had the brilliant idea to attack the job with a weed wacker. The result was not pretty and my dad was none too happy. You see, patience in not one of my strong suits when it comes to gardening. Perhaps that is why I leave that to my wife and I simply admire the result.

I observed a lot of things about my dad over the years. His patience amazed me with his true passionate hobby of growing flowers. He was a big guy and to see him carefully planting tiny seeds for hours on winter nights, was insightful to his personality. Most people who have hobbies are people who are patient and gain great joy from the effort it takes to build a model airplane, create a candlestick on a lathe, or some other pursuit that takes time and effort along with a lot of patience and love. The result of the effort brings satisfaction to those who create, and appreciation from someone like me who loves to look at flowers due to the example of the efforts of my father.

I will never have his patience for a hobby. Most of my passions lie in outdoor activities. I always say that I am too nervous and jerky for a hobby. But I certainly admire those who pursue those passions and encourage anyone who takes the time and effort to create. Take the time to stop and smell the roses………I do. Thanks for reading.

3 thoughts on “The Gardener”