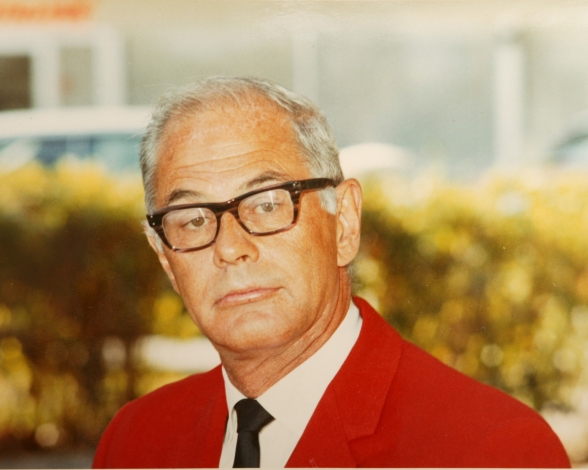 You know – there is a joke about Pittsburgh, my home town, that goes like this – ” How many Pittsburghers does it take to screw in a lightbulb? ” ” Three- one to screw in the bulb and two to remember how great the old bulb was.” Kind of funny but if you know Pittsburghers, you know it is true. Especially in sports. We love our teams and can remember the good old days of the Steelers( the Immaculate Reception by Franco) and the glory days of the Pittsburgh Pirates.

My pal J.B. Loughney posted a video the other day on the 60th anniversary of the 1960 World Championship Pittsburgh Pirate’s victory over the New York Yankees. The famous home run by Bill Mazeroski is still revered around here to this day. When I saw that video, it brought tears to my eyes seeing all those great players who I so admired in my younger years attending the games with my dad at Forbes Field. And to hear that voice again of Bob Prince, pictured above, the voice of the Pirates on KDKA Radio, really choked me up.. Bob’s famous line after we won a game was……” and we had am allllllllllllthe way”. I can still hear that in my mind and to hear it on this video was so gratifying. I remember how great the old bulb was. J.B remembers too. His grandfather was Joe Barr- the Mayor of Pittsburgh back in the heyday of the Pirates.

I can remember seeing all those players in the video many times during my youth and marveling at the talent of a guy like Dick Groat, who played basketball for Duke and then spent his career with the Pirates playing professional baseball. I was a catcher in minor league, little league, and pony league. The only position I ever played and Smokey Burgess, the catcher for the Bucs, was a hero to me.

One of the cool things that my dad did for me was to take me to the University Club for the Father and Son Baseball Nights. We would meet many of the Pirates and listen to Bob Prince, who usually was the speaker. Then eat dinner and go to the game. The Pirates like Bill Virdon, Donn Clendenon, Dick Groat, Harvey Haddix, Vernon Law, and many others would take the time to come to the event before the game to meet all the fathers and sons and sign autographs. For free!! No paying a fee for an autograph in those days and the players were happy to do it. We were all enthralled at the stories that Bob ” the Gunner” Prince would tell us about the ins and outs of Pirate baseball.

Following dinner, we all would line up in the driveway of the U Club and begin a march to Forbes Field behind one of the great jazz trumpeters of our time- Benny Benack. He would play with his quartet and we would march in a row behind him singing songs like ” Oh the Bucs are going all the way, all the way, all the way this year” Kind of cornball but whatever. I can still see it in my mind 50 some years later. Time flies but boy do I remember that old bulb.

Yes- those were the good old days of my youth and those players were true heroes to me. In those days, they played for the love of the game. There was no greed, holdouts for better contracts, or any of the other issues that plague professional sports today. Those guys loved baseball and were honored to play for the Pirates and sign autographs for a fat little catcher like me from the North Hills of Pittsburgh. That video really got to me folks and I watched it over and over as those days with my dad came alive for me again. So yes, I am the typical Pittsburgher remembering, and once again- thinking how great the old bulb was. Thanks for reading.