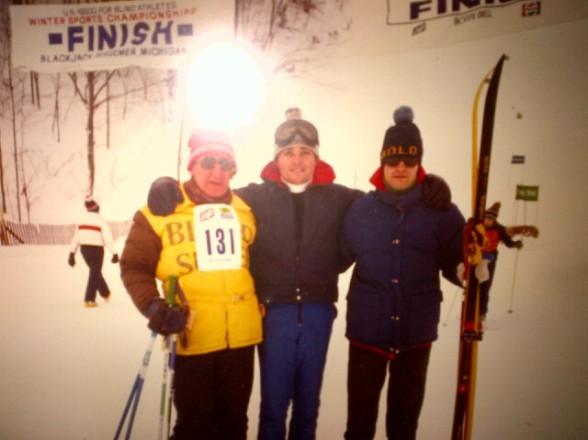 A day on the ski slopes never goes by when I ride the chair lift and don’t think about Fred Siget. Fred was our original blind skier around here that passed away two years ago in his early 90s. He skied well into his 80s and whenever I think about the times that I spent with him, I smile. Fred is seen on the left here in the picture at the National Blind Skiing Championships in Blackjack, Michigan. I was his guide. Fred was an interesting guy. He was a retired bus driver. He was also a volunteer fireman who lost his sight as a result of a high pressure water hose accident that detached both retinas instantly. All of a sudden he was in darkness. At the time, Fred was in his 50s and wondered what would happen now. After a stint at the Greater Pittsburgh Guild for the Blind, Fred learned to function as a visually disabled person and became the first blind computer programmer for Koppers Corporation. An amazing feat as he was well respected for his work and positive attitude.

I first met Fred at a Pittsburgh Ski Club outing. Fred was taught to ski at Seven Springs Mountain Resort here in Western Pa. by Jim Connolly, a PSIA full certified instructor. Jim developed a system and we expanded on it in the following years as Fred became famous for his prowess on the slopes with a guide following him and calling out commands. I became involved in Western Pa BOLD( Blind Outdoor Leisure Development) and taught the guides at the time how to teach skiing. They in turn taught me how to work with the visually impaired and that began a 34 year relationship which included many hours on the slopes with Fred Siget. Fred had a transmitter device for me as I guided him and he had an ear piece which made it easier to call out commands without shouting. Funny story- we were in the Foggy Goggle at Seven Springs having a beer one night when Herman Dupre- the owner of the resort at the time, walked in. I said to Fred,” Go over to Herman and tell him how much you like his red flannel shirt”. As Fred made his way over to Herman with me guiding him past the people in the bar, he said what I asked and Herman had a quizzical look on his face. After we let him in on the joke, he said” Pat- I have been giving this SOB a free season ski  pass for years and he tells me how much he likes my red flannel shirt. I was ready to murder him.” We all had a good laugh about that one and I proceeded to take Fred out to the upper parking lot because he said he wanted to drive again. We did donuts in the snow covered lot in my International Scout. I guided him from the passenger seat. He had such a good time driving again.

I had many, many good times with Fred and all of our visually impaired skiers and I always say that over the 34 years that I had been involved, I got more out of it than any of them.

They were hard core and skied in the rain, sleet and snow and loved every minute of it. Skiing was Fred’s life and he made the most of his impairment. In fact, he said to me that had it not been for his blindness, he never would have done half the things that he had done post accident. How is that for a positive attitude?

One of the main takeaways that I got out of my involvement with BOLD was an appreciation for all that I see when I ski. I don’t take vision for granted and appreciate what a blessing sight really is. 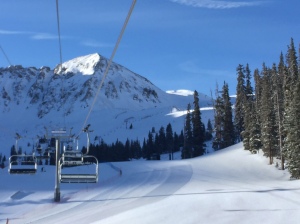 I sit on the chairlift and look all around at the snow covered mountains and think that today, Fred sees it all. I believe his vision is restored and he is enjoying what he missed for over 40 years, in his heavenly home. When my ski buddies ask me what I am looking at in the chairlift, I smile and think about Fred. I just remark how beautiful the mountains are and how I like to get those visions etched in my memory.

Never take things for granted folks. Remembering Fred, I see a guy who made the best out of a bad thing and it changed his life. I can still see him skiing with a huge smile on his face and skiers stopping with amazement at the courage and determination that was on display. We all should have that kind of positive attitude. Thanks for reading.