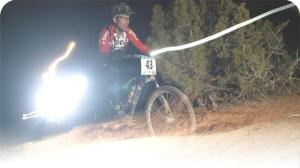 So I am at the start line in Davis, West Virginia representing the Vet division entry for Greenlees Mountain Bikes. The atmosphere is electric as the clock winds down to signal the start of this 24 hour team relay on the old motocross enduro course at Blackwater. Only there are no throttles in this race. All legs and lungs as the group lined up at the entrance to the river crossing at the very beginning of the course. West Virginians make mountain bike racing hard and Laird Knight was no exception in his innaugural races in this format. http://www.grannygear.com As the gun went off, we all ran towards the river with our bikes on our shoulders and waded accross the thigh deep water until we reached the trail on the the other side. Soaking wet, we were now in the race and the bumping and positioning on the trail was in full swing. As we found our pace, I let the adrenaline calm down a bit and got myself into a good peddling rhythm with some other guys as we made our way on the course. The next obstacle was a group of rocky ledges called “The Moon Rocks” which were a challenge to even run much less ride. It was followed by a swampy,thigh deep bog which represented another hike a bike until the trail emerged again. The finish of the course was non-eventful until we reached the end of the lap at the river crossing again. The portage of the bike began again and exhausted I reached the exchange tent where Chuck Greenlee was waiting to take the baton from me and begin his lap.

The important thing in 24 Hour Racing is to try to get some rest because your next lap was usually in another couple of hours. You had to clean and maintain your bike for the next ride( we had the luxury of shop mechanics from Greenlees and Dirty Harry’s) helping us. http://www.dirtyharrys.net We also had to get something to eat and then lay down in the small motel that was in Davis at the beginning of the course. Usually you had another afternoon lap before you had to rest again and then the real racing began- the night laps. Riding a mountain bike at night on rocky, muddy treacherous trails is a challenge seeing that 90% of all mountain bikes are never taken off road much less at night. I had some experience riding in North Park at night but racing at night is a whole other kettle of fish. In West Virginia it is eerie at 4 AM in the woods. The race is pretty spread out by that point and your light is fixed on the trail ahead of you. When someone came up on you it made you jump a little and when you came up on someone ahead of you, it was creepy too. Often times you heard things in the bushes beside you and you couldn’t help to wonder if it was a bear, or something else that goes bump in the night. One guy came up on me from behind and his light was burned out. He asked if he could folow me and I said sure. It wasn’t long before he fell off and I felt bad leaving him but I had a responsibility to my team mates to get back as soon as I could. Kind of like the guys who climb over people on the way to Everest or the selfish skier who says,” no friends on a powder day.” Oh well.

Our group was doing real well in the Vet division and as we approached daylight, I saw Tim Sweeney,my roomate, getting a cup of coffee in our room. The next thing you know, he falls over in his bed with the coffee spilling all over the place. He had passed out and I quickly tried to revive him to no avail. So, I managed to get him into my Blazer and started to drive towards the hospital in Oakland, Maryland. Tim would groggily come to and then pass out again leaning on my shoulder. I had to drive and push him towards the window. I was going about 90MPH on Rt.219 because I didn’t quite know what to think about Tim’s condition. All I knew was that I better get him quickly to the hospital. As I made my way to the emergency room, a nurse met me and I explained what had happened. She was a mountain bike racer as it turned out, and said that Tim was dehydrated. Tim was an expert racer and as all of our guys did, gave his all on all three of his laps to that point. Several of our guys had done the same and could only ride three laps. Unfortunately they were counting on me to do more because I paced myself and had some gas left in the tank for the morning laps. Knowing my fate, the nurse said to pick Tim up at the end of the day and I should go back to do my next lap. So there I was driving 90MPH again down 219 only to peel into the parking lot to my team mates yelling to hurry up because it was my lap. I didn’t even have time to explain why I was driving and they pushed me towards the river for my fourth lap.

Coming into the finish area after 4 laps, I was spent and the other guys asked me if I could do one more. They were so fast that they had expended all of their energy on three laps and I was the last guy to be able to make up more laps. Cramming some bananas down my throat and downing some Gatorade, I got on my bike and went out for my final lap. Being slow and methodical and saving energy in endurance races of this type can be a blessing or a curse. In this case, it helped our score, but in my eyes, it was a curse because I was trashed. Wading through the river for the last time was cold and I began to cramp. I made it to the other side and laid down for at least an hour talking to friends recounting the race and the harrowing drive to Oakland,Md. I always seem to get into some kind of pickle in events and this 24 hour race was no exception. We won the Vet division, our experts won their division, it was a successful jaunt to Wild, Wonderful, West Virginia for the Greenlees boys. Tim spend the day on a gurney but was glad that we did well. Racing or just riding in West Virginia is not for the faint of heart. I went back for another year and did some other 24 hour events over the years. But the Canaan experience is one that I will never forget. Tim won’t either. That gurney ruined his back. Thanks for reading.