You know, anytime you get to witness a sporting event up close and personal, it is electrifying. I have had the opportunity to stand on the sidelines at a Penn State football game, see Tiger rip off a drive at the US Open, and see World Cup giant slalom and slalom events from the side of the trail. It is amazing to see the skill level of these athletes. We have a local sports writer who pooh poohs the Winter Olympics and calls them games at best. He is also the same guy who does not consider Tiger Woods an athlete because he wears dress slacks to play his sport. I have had a running dialog with this guy who most likely never toed the line in a race or ever really had much experience as an athlete. Because, if he did, he would respect the talent and dedication that is needed to perform at a national level or a world class level in any sport. But in all of my experiences as a spectator, none was more electrifying than witnessing the Hahnenkamm Downhill Ski Race in Kitzbuhel, Austria. This race will be run again this weekend – the 75th edition, and if you have Universal Sports as a cable channel option, you can witness it live. I will have the DVR on for sure because I am addicted to the Universal Sports Channel.

A number of years ago, I had the good fortune of being selected to represent Western Pennsylvania along with Kenny Griffin and Mark Singleton on a PSIA trip to the Austrian Tyrol Region. 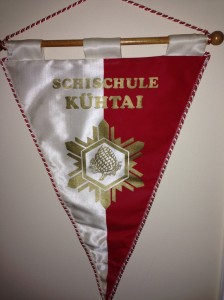 The event was sponsored by the Austrian tourist board and the ski instructors group from the US had representatives from all of the national regions. We were each domiciled in a particular area for one week- teaching and sharing experiences with the local instructors. The other week was spent skiing different areas of the Austrian Tyrol , but the highlight of the trip for me was to see the Hahnenkamm up close and personal on the side of the famous “Streif” race course.

Ski racing and bicycle racing in Europe is like the NFL here in the states. Eurovision broadcasts all of the World Cup ski races and cycling events and the European public is very knowledgeable about the details of each sport. They are rabid fans and show up in masses at events as shown on the famous climbs of the Tour De France. But there is no event that attracts more people in one venue than the famous downhill held each year in Kitzbuhel.

To give you a little bit of the atmosphere, imagine if you will, 100,000 people lining the race course, schnapps and beer flowing, excitement mounting as the first racers descend the mountain at an average speed of 66 MPH. At the start at the Mausefalle, the skiers are airborne and reach a speed of 60+ MPH within seconds of starting the race. The Austrian army uses water hoses the night before in the course preparation to ensure that the track is rock hard and icy, which the downhillers prefer. As they make their way down the 2.06 miles of racecourse, they come up on an off camber left hand turn called the Steilhang. This is where Kenny and I stood and watched as the rabid fans with their cowbells screamed as the racers flew by. The technical ability of a ski racer to hold a turn, on rock hard ice,off camber, at speed is impressive and it is anything but a game as the local sports hack surmised. The year we attended was in the prime of the “Crazy Canucks” where Canada reigned supreme for four consecutive years. Todd Brooker, Steve Podborski, and Ken Read were the heroes of the day, spoiling the Austrian and Swiss dominance of the race. I had seen Brooker race before when I worked at Sugarloaf,Maine. As a young guy with wild, wavy red hair, and a devil may care attitude, he represented Canada at the Can Am Races at Sugarloaf on his way to advancing to the World Cup level. It was neat to see him ski again in Austria at this premier event. He has had a checkered past with this event, winning once and having the worst crash of his life in Kitzbuhel on the Streif. 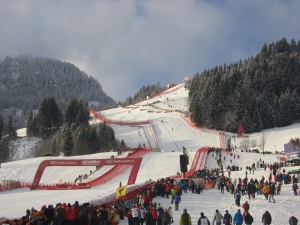 In the final straightway to the finish line, racers approach 90 MPH and as they cross the line, the noise is deafening. An electrifying sports experience to say the least. I have never seen a Grand Prix event or Indy, but I can’t see how those events could be any more exciting that seeing these world class athletes rocket down a steep alpine face at 90 MPH. These guys are all 220 pounds plus with massive thighs.  You have to be that strong to hold those turns in that course at speed.

These days , my viewing is limited to what I see on Universal Sports. I love to see how these racers make turns. Lots of ski technique taught today at an advanced level is influenced by the way a racer turns. World Cup ski racing is the benchmark for equipment manufacturers which trickles down to standards in manufacturing and standards in ski instruction. Witnessing world class ski racing is something that is always etched in my mind. I will never forget the atmosphere of Kitzbuhel, the great apple strudel, the beer, the food,  and having the opportunity to witness an event as powerful as the Hahnenkamm. If you get the chance, try to watch it on Universal or streaming on line. It is not the same as being there, but you will get the idea. Thanks for reading and enjoy the winter.

7 thoughts on “Hahnenkamm- The Super Bowl of Ski Racing”