One of the funny things that they say about flight attendants is ” Marry me, fly for free.” Now that was not the carrot that drew me to my lovely wife Janet, but it sure was a great perk while it lasted. 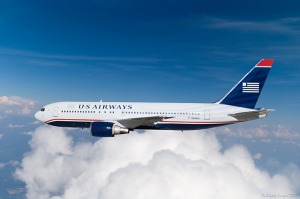 I can remember the first flight by myself as a “non-rev” passenger. In those days we had to wear a coat and a tie and Janet told me not to ask for any food unless they had enough to serve. Living in guilt ridden hell like I did, I didn’t move for the 5 hour flight to L.A. I politely refused any service and sat in the seat quietly and read my book for the entire flight. When I got to LAX, I ran to the men’s room and breathed a huge sigh of relief. When relating the story to Janet, she said the flight attendants probably thought I was some kind of weirdo. I got better at flying “non-rev” after that.
I saw a lot of places in those days and the ski areas were the number one target. Who can pass up a free flight to ski out west or in New England?

I got pretty good at judging what flights were full and where to go. I also got quite adept at changing my clothes on I-70 East in Colorado on the way to DIA. Many times I was stripping down from ski clothes to a rumpled mess of a sportcoat, tie and pants while on the move eastward. As I ran into the airport many times barely making the flights, I prayed that the doors would close and I would not get bumped. I didn’t realize that I still had the zinc oxide on my lips and the suntan lotion slathered all over my face. The baseball hat covered up the greasy helmet hair and all was good headed home. Although my seat mates probably did not appreciate the sweat and the stench for the 4 hour flight.

Jan and I had a lot of nice weekends together to the west coast when she worked a San Francisco flight or a San Diego flight. We would head out on a Friday night, get to the hotel and go out on the town. The next day we would get up early and sight see and hit every tour and restaurant we could during the day. We would have lunch at George’s on the Cove in La Jolla and see the Jags and the players in their Gucci shoes. I would ask Jan if she had a nice time? She would say “yes” and then I told it was time to get back on the bus with the bag ladies to San Diego. Reality struck hard. Then the plan was to take a quick nap because she would work the “red-eye” and we would be back in the burg early on Sunday morning. Those were whirlwind weekends.

When we would head to the beach, Jan became a weather channel junkie. If there was even a sniff of a tropical disturbance off the west coast of Africa, we were out of there. She always told the horror stories of getting bumped during hurricane season and often our trips were cut short because of a pending hurricane that was still thousands of miles out in the ocean. 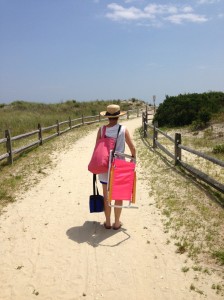 One time coming back from Jackson Hole for a ski trip, we were stuck in Chicago. We waited two days and there were no “space available” seats. No chance whatsoever with all the cancellations and we rented the last vehicle available at O’Hare and drove through the blizzard back to Pittsburgh. We had my cousin Michael in tow with his buddy and were packed like sardines as we braved the harrowing roads headed east.

Oftentimes, I would be in the airport and would run into a flight attendant friend of Janet’s, who would laugh and say to me, ” are you flying again and your wife is working?” I sheepishly said yes but somebody had to do it! No wonder my neighbors called me the married bachelor.

Janet eventually retired from the airlines when we had our son Jack and we moved to the frequent flyer points from Southwest for a ticket. The good thing about those is that you actually have a seat and are not subject to the potential of getting bumped off the plane in some location that was a connection. We continued to travel together but in a more relaxed mode and my individual, last minute trips eventually came to an end. However, being the flexible curmudgeon that I am, frequent flyers and work trips became a new target for associated fun. But the adventures of the “non-rev” flights will always be in my memory because of the unknowns of weather, full flights, and last minute runs to the gate because I had to get that last ski run at a major resort. Traveling space available with ski bags and bike boxes was a challenge, but it was always worth it when you reached the final destination.

Flights today are packed and when Jan speaks to her flight attendant friends that are still working, they say flying “non-rev” is difficult because of the full flights. So, we laugh and say, we got it while the getting was good. Lots of fun times and lots of memories thanks to my wife’s hard work with USAIR. Thanks for reading and don’t bring that zeppelin bag for the overhead. Check it. My wife’s buddies will appreciate your courtesy.