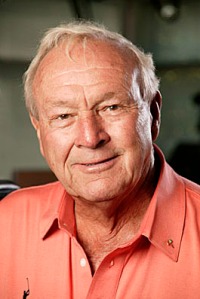 I have never been a good golfer. In fact, I have not played in four years. However, my dad introduced me to the game as a young man and the one thing I do have is a respect for the traditions of the game of golf. As a high school guy, I had the opportunity to attend the PGA National Team Championship at Laurel Valley here in Western Pa. Dr. Anthony Nicolette and his two sons Richard and John were all friends of mine from the neighborhood and Dr. Nicolette was Arnold Palmer’s eye doctor. When the team event was at Laurel Valley, Dr. Nicolette piled us all into his car and off we went to see the best golfers in the world compete. It was there that I had the chance to meet the great Arnold Palmer. Mr. Palmer to us. 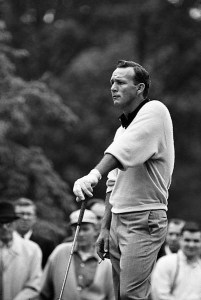 As young bucks, Richard and John and I were star struck as Mr.Palmer conversed with their dad. Doc N then always introduced us and with an intent, interested, look, Mr. Palmer shook our hand and asked how we were enjoying the day. His handshake was strong and his demeanor sincere as if we were all he had to think about at that moment. We were part of his army and he wanted to make sure we were having a good time.

A few years later, I had the opportunity to marshall at the US. Open at Oakmont. I have posted on the experience before but I remember Johnny Miller floating up the fairway in total concentration looking at no one in the gallery. Jack Nicklaus stared down most people in the gallery with a competitive steely eyed look that almost made you feel uncomfortable. Arnold Palmer, on the other hand, stopped to talk to all of the marshalls on our hole while waiting to take his shot. I remember him asking me where I was from and again, was I enjoying the tournament? Arnold Palmer, asking me, if I was having a good time while he was in the thick of the hunt for the US Open! That is the kind of guy he was and we lost a good man this week in Western Pennsylvania when he passed away on Sunday. 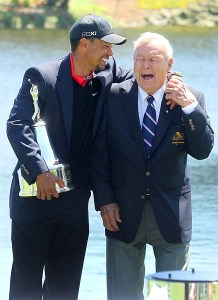 There has been a lot written about the man this week by some very eloquent journalists and folks who knew Arnold Palmer very well. I do know he was a kind man, a benevolent person with the March of Dimes and building a children’s hospital in Orlando. I know he was a mentor to young players for many years including Tiger Woods. But as the writers say, he made golf accessible to the common man. This included young guys like Richard and John and me who were amazed at the time that he afforded to us and his friendly relationship with his eye doctor with whom no request was too much. He made sure Doc Nicolette was given primary parking, marshalling duties with Laurel Valley attire, dining privileges and on and on, personally attended to by Arnold Palmer himself. He took care of Doc Nicolette and didn’t leave it up to his assistant. That is the kind of person we saw when we had interaction with this legend from Latrobe, Pa.

He is gone now. But his legacy will live on and his benevolence for charitable causes will also continue because of his personal attention to detail. No wonder the “army” followed him faithfully years into his career. You always knew where Palmer was on the course. Richard and John and I have him etched in our memory forever because of his kindness to us and his eye doctor. RIP Mr. Arnold Palmer. Thanks for reading.