From the Best of http://www.chroniclesofmccloskey.com 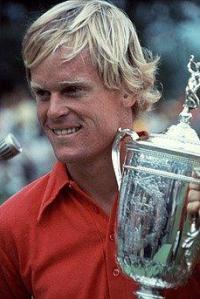 Its funny, people come up to me and ask if I play golf? I respond,” only if I have to.” I am a little too nervous and jerky for golf and I always remark that if they could pitch the golf ball to me, I might do better. In any event, outside of the occasional 9 holes for fun with Janet(my wife), I really don’t play much golf. However, I do have a history of sorts with the sport. I rented clubs at Ballybunion, the famous course on the west coast of Ireland, and promptly lost 6 balls on the first 6 holes because the rough was so high. I ended up returning the clubs because the shop was closed and walked the rest of the course just to see it. Very scenic but not a place for me to play golf.

When I was a kid, my dad played golf at Shannopin Country Club in Pittsburgh and being a child of the depression, he was father enough to say that,” I play golf here- you can work here.” Which is what I did, parking cars, working in the kitchen, and most of all caddying. Being a caddy was an enlightening endeavor in that you met the most interesting people and see how they react under competitive circumstances. Take the good guys- Gene Sutherland, Don McClelland, Bill McClelland, and whatever victim they could find as their fourth. My friend Tom Herder and I would park in the lot at about 3:00 AM so we could be the first on the list to assure two rounds of doubles on any given Saturday. If we were given these guys, we were assured of balls right down the middle and hilarious comments in the midst of a very competitive and financially lucrative competition. These guys would try to beat each other each weekend, get a shot and a beer at the turn, press the bets, and then continue the competition at the card table playing gin late into the night. If I was on the winning side, I got a nice tip. If not, they were still generous but not happy.

The other caddying experiences were not as fun with the hackers spewing drives and errant iron shots into the woods. If I found one close to the out of bounds marker, I would kick it back in bounds to keep the round going and also assure a nice tip because of the pleasant experience of finding a surely out of bounds ball miraculously in bounds. Smiles abounding and a nice financial reward at the end of the day. The ladies days were another story. There were the good ones like Carol Semple who was a national amateur champion but most of the ladies who participated were, shall we say, challenged. I was always polite but when they asked me what to hit on their 19th shot on the hole, did it really matter? Oh well.

All of the time spent at Shannopin yielded me a nice benefit one year. John Conley, who was the golf professional, asked me if I wanted to work in his place as a marshal on one of the holes at the US Open at Oakmont in 1973. That was the year Johnny Miller set the course record with 63 on the final round. I marveled at his focus as he seemed to float through my hole just staring into the distance and visually acknowledging no one. He was in the “zone” and the 63 was remarkable. As a marshal, I was representing the local chapter of the PGA and had a PGA hat on my head along with an official Oakmont US Open 1973 shirt and slacks. I sure looked official even though I was 18 and didn’t look anything like a golf professional. The moment of truth came about when Lionel Hebert, a veteran tour professional, hit his ball into the sand trap right in front of me. As he approached, my blood pressure started to escalate as he asked me if he could get some relief seeing that there was water in the trap. I looked for the USGA guy who was not in sight and fortunately I remembered the Rule Number 25 in the USGA Rules that addressed casual water. I remember from my caddy days that if you could bring up water by pushing your foot near the ball, it was considered “casual water” and the golfer would be granted a club length relief. I stated this and Lionel Hebert stepped near the ball, brought up water, and looked at me. Fortunately the blue jacket and the gray pants of the USGA Official came into sight as I gave my opinion, he nodded that this was the right call and granted Hebert a club length relief. Lionel placed the ball in a dry spot, took out an iron and sent the ball flying and thanked me for the ruling. I was relieved and the USGA guy nodded his approval and moved on. I couldn’t get off that course fast enough but what an experience for an 18 year old caddy and car parker from Shannopin. Whew!!!

Good thing my dad made me work as much as he did. It built character and understanding of life that I took with me to the box factory where I worked summers in my college years. It honed a work ethic that I have tried to pass on to my son Jack who is carrying the McCloskey torch with employment. It all seems so long ago but Shannopin and the US Open at Oakmont are etched in my brain forever. Thanks for reading.  Back to the trail and woodsy stuff next week. Fore!!!!!

6 thoughts on “Know the Rules!”