Posting a little early to beat the Christmas rush, but this time of year, I always think of some of the great mountain towns that I have visited during the Christmas season.  One that comes to mind this year is North Conway, New Hampshire in the Mount Washington Valley. http://www.mtwashingtonvalley.org  I have visited this iconic location many times in my life with trips to Tuckerman Ravine and adventures on the legendary Mt. Washington. http://www.mountwashington.org  I have skied Wildcat and Attitash and have done some extensive hiking in the White Mountains.  But the true spirit of this location lies in the history of the area which was introduced to me by a business associate of my dad’s -John Lennon.

John owned a company in Boston named New England Tank and Tower and my dad represented his company among others in his manufacturer’s rep business.  John called my dad after learning that I was an avid skier and invited me and a friend to come up to Boston and then go to the Mt. Washington Valley to ski Mt. Cranmore.  I jumped at the chance during my freshman year in college and along with my ski buddy, Tom Herder, we made our way to Boston, weaving and bobbing through the suicidal traffic along Storrow Drive to I-93 North and New Hampshire.  We met John at his cabin near Mt. Cranmore and the initial fondness for the Valley began.  John was the typical New Englander, quiet, reserved, but willing to show two young guys some serious skiing in the Whites.  Our first stop was Cannon Mountain which was the home of the famous aerial tramway and close to Franconia State Park’s famous icon- the Old Man of the Mountains. 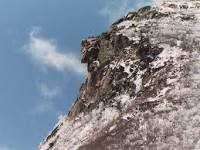 When I first looked at that rock formation which resembled an old man’s head, I thought it was funny as John was giving us the history of the area, that we were skiing with an old man and looking at the famous “Old Man” which subsequently crumbled in 2003.  Cannon was a challenge that day as it was icy and very much like skiing on a marble table. 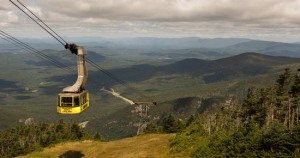 John explained that this weather was typical for for the area and that if you could ski Cannon, you could ski anywhere.  Tom and I were so enthused that we skied right through lunch- much to John’s dismay.  We gave him all he could handle that day and he called my dad to tell him that Tom and I tried to kill him.  We all laughed and made our way back to John’s rustic cabin for a venison dinner.  Now the last time I had venison, it had tasted like a catcher’s mitt and I was not happy that this was the first meal that we would have other than breakfast that day.  But like the history lesson, the gracious invitation from John , and his New England hospitality, his meal was equally enjoyable.  John knew what he was doing and we learned that he had many talents besides his acumen as a businessman.

The next several days were spent at the local area, Mt. Cranmore, which was John’s home hill.  Founded in 1938, it had a rich history of skiing as well as ski instruction dating back to the days when the local entrepreneur Carroll Reed brought  ski instruction to the area via Hannes Schneider and his group of Austrian instructors.  This history continued through the decades and Mt. Cranmore became a legendary resort in the Christmas town of North Conway.  The thing that was really interesting to me was the Skimobile.

This had been invented in the late 30s and with the encouragement of Hannes Schneider, it became the main lift at Cranmore. 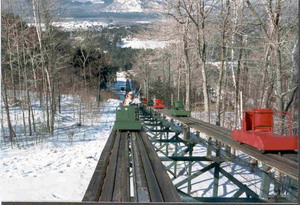 It was an incline where you sat down in the cars with your skis, and took an enjoyable ride to the top up a very steep track.  The Skimobile is history now along with the Carroll Reed shops, but the memory of those days at Cranmore, skiing and riding the famous skimobile, are etched forever in my mind.  John Lennon was a wonderful host and Tom and I made our way back to Pittsburgh with a lot of great memories and stories about our times in the Valley.  The seed was planted for me and I made it back there numerous times in my ski life.  I still have memories of the Christmas lights all through the town and the ambiance that was created by that place.  It is as if when you enter town after driving the famous Kancamagus Highway( voted by AAA in years past as the most scenic highway in America), you feel the town and the White Mountains almost give you a warm, welcoming hug. Weird but true!

You feel protected in the town especially in light of the wicked weather at the ski areas and the world’s worst weather on top of Mt. Washington.  I have camped there skiing the Ravine where 90 MPH winds and sudden snow squalls were common right after a sunny start to the day.  I did the Mt. Washington Hill Climb(bicycle race) there one year when it was sunny at the start and 41 degrees and sleeting at the top- in September.  But walking in the valley and seeing the peaks while dining or shopping is especially inviting at this time of year.

One of my most historic memories of being in the Valley was one year when I attended a PSIA clinic at Cranmore.  I had the opportunity to meet Toni Matt who recounted his famous winning run in the Inferno Race on Mt Washington.  This run was legendary and to actually meet a person who would go down in history as a member of the New England Ski Hall of Fame was really special to me.  As you can tell, I have a real fondness for the Mt. Washington Valley.  I would highly recommend vacationing there at any time of the year.  Christmas is particularly scenic and a stay at the famous Omni- Mt. Washington Hotel might be appropriate.

Ski Bretton Woods along with Cranmore, Cannon, Wildcat and Attitash and you would have the classic New England Ski Vacation.  Think of me, munching on that venison beside a crackling fire and enjoy your world class experience.  Think Snow and thanks for reading.