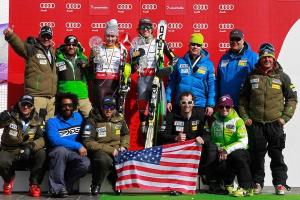 In February, the world will take another breather from the political and social pressure and focus on an event that happens every four years- The Winter Olympics. The Russians are the host of the 2014 Games in Sochi which will again be a spectaclar event shown to all of us on the NBC network. There have been the usual misgivings about whether Russia is ready to host and whether all the construction and supposed environmental issues have been put to rest. But to be sure, Vladmir Putin will make sure that it is all done well. He is not only a strong willed guy but he is also an avid skier. The Winter Olympics will not only be a showcase to the world for Russian commerce and tourism, but it will be a financial boom to an area that is starting to take it’s place on the main stage of winter destinations. One thing for sure, it is an event not to be missed. NBC will have expanded coverage of many events that are not familiar to many viewers, but if you take the time to appreciate the hard work and dedication of the athletes, and that this is the pinacle oftentimes of their careers, you can really enjoy the stories and events that make up the Winter Olympiad.

I love watching the Olympics. Not only because I am a winter sports nut but also I can appreciate the dedication that goes into putting on an event like this and the efforts of the athletes who participate. Unfortunately, this is lost on some local sportswriters who show their ignorance by writing articles that demean the Olympics. When your frame of reference is only football, basketball and baseball, you really should not be reporting on an event with which you have no familiarity. If you visit major metro areas, there are writers who are experts contributing to an enthusiastic reporting of the games. Also,in the cities that have winter sports as part of their infrastructure of tourism, you have this same feeling of support for the events. I have had the experience of writing to the editors of my local rag because their reports on the games have been jaded and lacking the proper information. One guy had the gaul to call the sporting events “games” and that they really are not sporting events. I responded that perhaps football games, baseball games and basketball games are played by gamers and not athletes? I informed him that if he ever took the time to attend a winter sports event, he would see athletic prowess in every sense of the word. A downhill skier rocketing down an icy slope at 70-90 MPH with legs like a fullback is hardly a gamer. A skater performing a triple axel or a hockey player digging it out in the corner against a tough Eastern European team is an athlete. Cross country skiing takes every bit of strength and aerobic capacity to compete at the international level with the athletes absolutely spent at the finish line. I threw a bone at the guy and said that I would maybe consider curling a game, but nothing else. This is the same guy who said that Tiger Woods was not an athlete because he wore pleated pants. I guess my point is to the local sportswriters to get informed and jump on the Olympic bandwagon instead of pooh pooing something that most of the world embraces. Ignorance is revealing in local sports writing and it always happens around the Winter Olympics.

I had the good fortune of attending the 1980 Winter Olympics in Lake Placid. My cousin worked for Coke at the time and gave me $900.00 worth of tickets. My friends, the Durfees, and I attended most of the events but the hottest ticket was hockey. We could not trade or buy any tickets and ended up watching the Miracle on Ice in a bar across the street from the hockey venue. We stood at the top of the ski jumps and my heart was in my mouth as I imagined sliding down that steep pitch and jumping into the abyss only to land to the applause of the thousands of spectators attending those events. Ice dancing, figure skating, cross country skiing were all on our agenda as we made our way through the Olympic Village every day. It was real cold at those Olympics which was typical for the Adirondacks in February. When we arrived at the parking area and were waiting in monstrous lines to catch a school bus to the events, the cold really sunk in and as I admired the Olympic Flame in the distance, the guy next to me who had a distinct Brooklyn accent said,” I’d like to sit my ass in that flame right about now.” We all laughed heartly at that one and the comraderie made the cold bearable. Trading pins was the rage and it became a mission to try to get as many supplier, and team pins as possible. We had the good fortune to see Eric Heiden win all of his speed skating medals and it was amusing to see the Russians hunkering in fear as they saw him take the oval in his gold Descente speed suit. I tried the skates out at the Oval one other year and believe me, it is hard to stand up on those things let alone fly around the rink like Heiden did. He was an impressive athlete who went on to cycling fame with the 7-11 Team and eventually made it through med school and now practices medicine out in California. I met him at a road race one time when we all were staying at the same hotel as the 7-11 team. Even though he had lost some upper body mass, his legs still would be the envy of the Incredible Hulk. You could not meet a nicer guy and for some local sports hack to call what he did a game, is appalling.

If you ever get the chance to attend the spectacle that is the Olympics, don’t pass it up. The energy in the Oympic Village, the opening and closing ceremonies, the pins, the athletes walking around and being accessible for conversation, is something you will never forget. This winter, in February, take the time to watch the events. It is amazing to see athletes participating in short track speed skating, skiing, ice dancing, hockey, and the reported stories of how they sacrificed to get to the Olympics and realize their dreams. Some of them realized and some of them dashed with the agony of defeat. It is a spectacle to embrace. Don’t get caught up in a local rag who publishes writings of some uninformed and jaded reporter. Look for publications and internet stories that are informative and promote the goodwill that is the Olympic Games and foster the Olympic Spirit. Hey, the world needs a break every once in a while to compete against each other in sport and not on the economic or military platform. Enjoy the Olympics and thanks for reading.

6 thoughts on “Enjoy the Olympics”