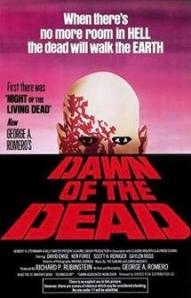 How about this for a title for a blog post? This should get a few clicks tonight. This is actually the trailer from George Romero’s classic horror film “The Dawn of the Dead” which was produced in 1978. I am straying from my usual topics for my blog posts and telling you a little story about my experiences as an actor in two of George’s films. Yes, I did have a speaking part in two films but before I get to the gory details of that, I need to tell you of my original association with George Romero. George dated and subsequently married my backyard neighbor Christine Forrest. Early in his film career, he used our neighborhood and lots of the folks who were neighbors and friends as extras in his early movies. I was a young teenager and the kids in the neighborhood all thought that Hollywood had come to the North Hills. It did!!! Every night we watched as the cameras were positioned, lights were set up and we all were told to be very quiet as the action began. George was great with all the neighborhood kids and he introduced me to Stephen King whose movies George directed and produced for many years subesquent to his stint in the old neighborhood. Stephen was a friend of George’s and when he introduced him to me, I was really unaware of his notoriety and I said, ” Hey Steve, nice to meet you.” I then bolted to the food table and scooped some of the cast’s free dinner. Typical teenage rube, but we all were the same, soaking up Hollywood and scamming what we could.

Several years later, George asked me to be in his film “Dawn of the Dead” and he said that I would have a speaking part as a police officer escaping from the zombies. Yee haa! I was very psyched as I was two years out of college and this was a pretty cool gig for a young guy. I had to appear for makeup at the Southside Police docks on the river in Pittsburgh and I was addressed as the “talent” by the production assistants as they asked me if I wanted anything to eat or drink. Me? The schlub from the North Hills addressed as the “talent.” Now that was comical, but I tried to be professional and the assistant director gave me my script and showed me my famous lines. It read,” Hey man, I ain’t going nowhere in nothing I can’t drive myself.” I was to pilot a helicopter as a police officer to escape the impending onslaught of the walking dead. My other line was identifying a police cruiser and I said,”Hey- there’s a black and white!!!” My partner, who was a professional actor, kept blowing his lines but I was proud to say that I remembered my cue and my two lines and was a fairly believble cop. I was amazed at the time it takes to film one scene in a movie and I can respect the costs associated with movie production. The makeup for the zombies was amazing and all of it was choreographed by the highly acclaimed makeup artist, Tom Savini. Tom is a regular guy from Braddock,Pa who has done all the award winning makeup for films like “Halloween” “Texas Chainsaw Massacre” and many others. Tom likes the ‘burg, and even though he has spent a lot of time in L.A, he still calls Pittsburgh home. We wrapped up my scene and years later I saw my police partner on an airplane to New York with his Burbury trenchcoat and matching scarf draped nattily over his shoulders looking quite the actor part. I introduced myself and he gave me a rather disgruntled look as to why I was bothering him. I wanted to remind him that I always remembered my cue and lines and he blew his lines ten times much to the chagrin of the crew on the police set. But I didn’t go there and wished him luck. Actors!!!

My second movie was “Monkeyshines”. Now by this time, George had many actors of notoriety on his sets. Ed Harris, Adrienne Barbeau, Hal Holbrook, to name a few. George always was gracious and introduced us to the stars and we appreciated his kindness and his ability to remain humble despite raging success in Hollywood. Now “Monkeyshines” needed some runners and cyclists in a scene filmed in Schenley Park and George once again called on me because he knew I was an avid cyclist and road racer at the time. I was once again to be at makeup and the scene filming and I rode from my townhouse down to the park adorned in my best racing duds. My line was,” Hi- How are ya doing?” Simple. Ride by the lead actor, say hello right before he gets hit by a truck and becomes a paraplegic. If you ever rent the movie, don’t go get a beer, go to the bathroom or blink in the beginning because you will miss me. I asked George how my inflection should be on my line and he laughed and said,” Pat- just say the line.” I was thinking,” HIIIIIIIIi………..how ya doing?” Or ” Hi, how are youuuuuuuuuuuudoing?” Or perhaps something else but the one production assistant reminded me to just say the damn line and move on. Turns out he hated cyclists and did not know I was a FOG(friend of George). When he finally did find out, he fell over himself trying to be nice, but I was thinking about my former horror film experience and wanted to take a chunk out of his neck like the old zombies that I met and loved. But I kept my angry carniverous tendency in check and remained a person of the living and not the “un-dead.” George thanked me and gave me a check as a speaking actor and I rode off into the sunset on my 3 Rensho bicycle never to act again.

George went on to great success but I am sure he looks back with fondness at his early days in the neighborhood with my parents as extras, my sister as an actress in several of those movies( she is a Carnegie Mellon Music Theatre Grad), and many neighbors as goulish zombies wandering the malls and neighborhoods seen in the early movies. Yes, the 58 year old kid has had many funny and memorable experiences but to be in horror films was a special treat and to see a glimpse of Hollywood was indeed a revealing and “ghoulish” experience. I still don’t go in anything I can’t drive myself- except for airplanes I suppose? Thanks for reading and remember to sleep with one eye open.

10 thoughts on ““When there is no more room in hell, the dead will walk the earth.””