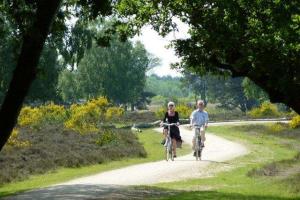 As I was winging my way accross the Atlantic on another cycling adventure to the Netherlands on KLM Dutch Airlines, I found myself traveling with a group of Hasidic Jewish gentlemen who seemed to be all together on a trip. Being the inquisitive(nosy) person that I am, I inquired with the gentlemen sitting next to me who informed me that they all were on their way to the Diamond Market in Amsterdam. I quickly was treated to a discertation on diamond clarity, cut and other factors that are key when selecting a diamond. A lot of information for my mind to process but nonetheless I was amazed at what you can learn on an airplane if you are a little forward and a little inquisitive.

As we made our way to the hotel, I assembled my bike and began exploring one of the world’s most facinating cities. I cycled along the famous canals and watched the houseboats float lazily along and was amazed at the brilliant colors of the tulips and the other flora that decorated the homes along the canal. I made my way to the Rijksmuseum where the famous paintings of Rembrandt and others reside. As I gazed at the painting of the Dutch Masters, my childish mind went back to the sultry Edie Adams singing “Cigars, Cigarettes, Tiparillos?” . Because I was such a rube when it came to art, I could only relate to the painting because I saw it on the cover of the famous cigar boxes. I wished that I had taken an art appreciation class when I was in college as I exited the famous museum and made my way to the Van Gogh museum where I was equally baffled. As is the custom in galleries I gazed at the paintings again not knowing what I was looking at and caught the gaze of another patron next to me. I could tell that he thought I was the ugly American who didn’t appreciate art and uncomfortably I made my exit into the streets to treat myself to the famous cafes. In Amsterdam, I quickly discovered that the rules are …….there are no rules, as people smoked their hooka pipes, and other herbs shamelessly along with drinking free flowing Amstel and Groelsch brews. Chuckling at the freedom that the Dutch have in their signature city, I peddled to another section of town where I purchased a pair of clogs. I thought I was pretty hep as I exited the shop and slung the bag over my shoulder. I heard some voices from above yelling,” Hey college boy- hey college boy.” Now I hadn’t been called a college boy for some time and I realized that I had peddled into the Red Light district. Feeling sheepish I exited rather quickly as the calls turned to jeers. Amsterdam- what an amazing city.

I rode along the Zuyder Zee which is the famous barrier built by the Dutch to keep the Atlantic from flooding their below sea level country. It is kind of eerie when you peddle along thinking how catastrophic a leak would be. I cycled the roads of the famous Amstel Gold Race and as I made my way along the famous cobbles, I thought of how tough the Euro cyclists were as my fillings almost rattled out of my head from the pounding of the rough cobblestone roads. However, there is a more gentile way to cycle along in the Netherlands. In the post war era, the government had to do a lot of rebuilding of the infrastructure due to the incessant bombing raids during the war. The economy in post war Europe started to flourish again and the resurgence of the construction led to an improved economy and a love for the automobile. However, as the roads became clogged with traffic, the Dutch were looking for an alternative especially as the 70s created a world wide oil crisis. The need for alternative transportation was at the forefront and the government created a system of paths called Fietspads(people paths) that became very popular not only with commuters but with folks who wanted to travel auto free in the Dutch cities and countryside. I utilized a lot of these paths during my visit and made my way through towns and villages that were named for the cheese that they produced. Villages like Edam and Markam were names which I related to cheese and I had my fill along the way washing the samples down with the famous Dutch brews. Another way to make your way besides the people paths were the smaller ferries where you could load your bike and take a pleasant ride along the canals and rivers. The ferries were always commanded by these tall Dutch girls who looked like they could throw you out of the boat if you messed with them. It is humbling to feel like you have stepped into a hole when you are standing next to them, but they definitely commanded your respect and admiration. I was definitely polite to them as I made my way.

If you go to You Tube and look up How the Dutch Got Their Cycle Paths, you will see an interesting history of the paths as well as transportaion in Holland. I was amazed at how the Dutch ride their 3 speed Raleighs with the fenders to commmute to work. Wearing suits and dresses does not impede them as they travel by the thousands to work. With the cost of petrol in Europe, this type of transportation is a must. We are learning in America and even here in my home town of Pittsburgh. We now have a network of bike paths and bicycle sharing programs in the city. Lessons are being learned about the health advantage of cycling and the economy of using two wheels to travel to work and to enjoy the scenery of Western Pa. Taken right out of the Dutch playbook. Thanks for reading.

6 thoughts on “Cycling the Fietspads(people paths)”