Piloting a water craft has never been my strong suit.  I have always been attracted to rafts, kayaks, canoes and the like, but my technique has never allowed me to be successful.  In fact some of the most humiliating experiences of my outdoor adventures have been my poor attempts to navigate the waters of adventure.

It all started when I was a kid and our community pool manager,Don Geyer, took all of us to Ohiopyle,Pa. to go rafting on the Youghiogheny River.  It was fun and the large rafts navigated the rapids rather easily and I thought I was destined for greatness on the waters of the Laurel Highlands.  We had several trips over the years and I always went and my appetite for water adventure was created in those rapids on the Yough.  Fast forward to post college in my granola crunching years where I thought it would be cool to take up kayaking.  I took a 6 week course and felt really uncomfortable trying to roll myself upright in a pool in the kayak.  I always exited in ” save my ass” fashion and surfaced much to the disappointment of the instructor.  As patient as he was, he was not getting the rollover technique ingrained into his worst student.  I like to consider myself athletic but for some reason, the kayak and I were not friends and my balance sitting down in the thing was tenuous.  It was at this time of the year when we had our “graduation” on the Yough and I went to Ohiopyle with the group on a crisp fall day with snow flurries in the air.  Not the optimum conditions in my mind.  But I brought my state of the art Buckflex rain suit with me figuring that it would help me stay dry and warm as I navigated the river.  As expected, I went in the drink a lot and my rain suit was a poor substitute for a wet suit and I paddled soaking wet for most of the outing.  With snow flurries in the air and my teeth rattling from heat loss, I was a poor picture of a successful kayak whitewater adventurer..  My expert paddling friends Bert Davis, Jim Weaver, and John Hinderliter would not have been happy with my performance.  As I dragged the craft up the hill to the truck in silence, I knew that the kayak world of Ohiopyle was not for me and I had better find another pursuit.

So moving on to the next opportunity, I entered an interesting race in the mountains that was a combination of skiing, mountain biking, canoeing and trail running.  My friend Dixon and I entered this race and I was undaunted by the fact that I had never piloted a canoe.  I figured that I had the skiing, cycling, trail running thing down pretty well and that the canoe would be a short venture into the unknown.  Was I surprised!!!  The skiing went well as we crossed the face of the mountain as fast as we could and were the first guys at the transition.  Dix and I both jumped on our bikes and rode the snow covered trails down to the Loyalhanna Creek where the canoe transition was placed.  Pumped up by the fact that Dix and I were both in the lead, I jumped in the canoe and promptly flipped it and I ended up in the drink again only this time, the water was bone chilling, teeth rattling, icy cold and it took my breath away.  As I saw Dixon successfully paddling downstream( he had been a canoe paddler all his life in his summers in New Hampshire), I scrambled to right the canoe and managed to drag my soaked frame into the boat and start the process of paddling.  As my legs started to cramp from the cold and wet, I once again told myself that I would never paddle another craft in my life as my teeth rattled in a deja vu fashion from my kayak days.  I managed to get the canoe to the shore for the next transition and changed into my wet trail running shoes and was able to catch up to Dix because he was not a runner.  We both were surprised that someone had surged ahead of us on the water and we ended up second and third, but looking at the snowy banks of the Loyalhanna from a submerged position in the water was an experience that I did not want again.

The last foray into the water craft world was right after I was married and much to my trepidation, I relented to take my father in law, mother in law, and my wife on a rafting trip on the Yough.  They knew that I had done it before and I was the household resident expert.  I ended up with my mother in law and my wife in a small 4 person raft as my father in law went with some other friends.  All was well until we approached the notorious “Dimple Rock” which had the reputation for bending canoes in half and sucking unsuspecting rafters into a vicious eddy before spitting them out into Swimmers Rapids. As luck would have it, my female companions were firmly planted in the front of the raft with yours truly at the rear piloting us directly into the path of the infamous, sucking rock.  No matter what I did, that thing was like a magnet and as we hit it flush in the center, the raft folded in half, I ended up 8 feet in the air and as the raft sprung back into shape after bouncing off the “Dimple” I was ejected out into the Swimmers Rapids.  My wife said later that she was talking to me and looked back to see no one in the rear of the craft..  I floated by them laying on my back with my life vest and tennis shoes protruding from the rapids and told them I would see them in a mile at the end of the Swimmers Rapids.  They were not too happy to be piloting the 4 man raft which was now the panicky two lady raft.  I climbed back in at the end of the rapids with my ears ringing with nothing sympathetic to say the least.

So as I see the leaves falling and the beautiful colors of the Laurel Highlands in full grandeur, I like to view it all from the seat of my mountain bike or on foot hiking the miles of available trails in our ridges to the east.  I have been tempted to try SUP and perhaps kayaking again.  But safe to say, those thoughts quickly vanish as I picture the drowned rat 59 year old kid on the waters of adventure.  Thanks for reading and don’t let me dismay you. 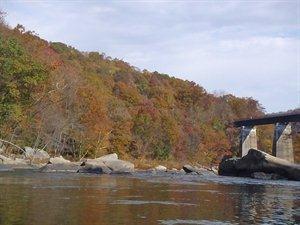