We had a former pastor say one time that there are people in this world who are “drainers.”  People who will suck the living life out of you with their neediness and high maintenance ways.  Then there are people who fill your personal cup to the brim and overflow it with kindness, appreciation, information, friendship, and other enhancements to your life that make you appreciate with wonder- why do they do it?  How do they do it? ” Boy, am I glad that they do it.” ” They are a real force in my life.”Usually people like this have many talents and interests.  I call them Renaissance men or women.  They appreciate life and all it has to offer and are willing to share their talents, wisdom, care and friendship with those around them.  One such person in my life is a guy named Don Cunningham. 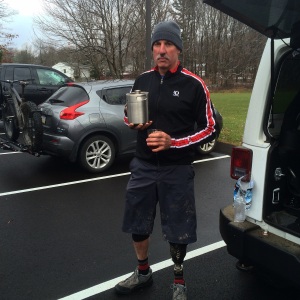 Now I am not going to DWELL on the fact that Don is an accomplished freelance engineer for sports television or that he has traveled the world working events like the Olympics, the US Open Golf Tournament, the Masters, Steeler games, Penguin hockey games, Pirate baseball games, the Tour of California bicycle races, the US Pro Cycling Challenge.  Nor am I going to DWELL on the fact that he takes his gear with him and gets a road ride or a mountain bike ride in, or even some slope time skiing.  But Don makes the most of his travel and is not a “slam clicker.” https://chroniclesofmccloskey.com/2013/05/19/dont-be-a-slam-clicker/

Again, I am not going to BELABOR the point that Don is also a very accomplished mountain biker who has an enthusiasm for the sport that is infectious to others around him.  When you see his fitness, and skill level in negotiating rocks, roots, stumps, steep downhills, and grueling uphills, you are amazed at his riding ability.  Don has competed in some of the most daunting MTB races on the planet including the Trans-Alps in Europe as well as being a 10 hour finisher at the Leadville 100 garnering the coveted silver belt buckle.  But he is very humble about his accomplishments.  Kind of like a “ho-hum- yes I did that”  response.  But with all his ability on the bike, he is willing to ride with new riders and show them the ropes of the riding game with a smile on his face and a willingness to spend whatever time it takes to introduce a newbie to the sport.

I similarly am not going to PONDER on how he skis with fluidity and enjoys the winter months almost as much as the more comfortable months because he is willing to subject himself to the weather or any ski conditions. We went to Holimont last season in Western New York and had a wonderful day together at this private ski club and Don handled the cut up Lake Erie fluff with style.  His turns were strong and deliberate but his enthusiasm for the day was the most memorable thing to me.  We both are ski nuts and it was wonderful to share the winter wonderland with a friend like Don.  He even drove which was even more pleasant. 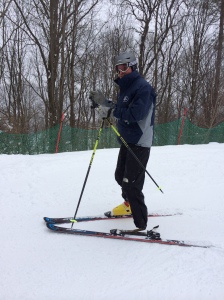 The guy has been everywhere, done everything, and always seems to be in the mix of the fun events that mark our outdoor sports world.  If there is a big ride – Don is there.  If the skiing is good locally or out west- Don is there.  He makes friends easily as is evidenced by his recent meeting with a good friend of mine in Aspen on a mountain bike ride.  He was a bit lost and rode up to some folks on top of a ridge in Aspen.  With a smile, he asked for directions and the girl noticed the pronounced Pittsburgh accent.  After a few exchanges she found out that Don was a friend of mine.  Laughs abounded and now Don is a new riding buddy for Liz Talenfeld when he goes to Aspen.  He is like that.  Makes friends easily and people like to be with him.

Finally I am not going to GO ON SHAMELESSLY, about how Don makes absolutely the best beer in the universe.  His skill as a craft brewer is legendary and at every mountain bike picnic whether he is there or not, his beer is there and the accolades ring far into the night fueled by the current Cunningham IPA.  He is a Renaissance man, I tell you, in every sense of the word.  Traveler, athlete, educator, brewmeister, but most of all…………Don is a friend.  He probably has mastered that skill the best.  He is truly one of those individuals who fills your cup or fills your spirit and when you have spent some time with Don on the slopes, or on the trail, or sitting by his keg of IPA, you feel so much better just having spent the time with him.  He is compassionate, knowledgeable, energetic, and in most instances can grind you into the dust at his chosen sport.  But being an enthusiastic friend is what he does best.  If you can assemble some Renaissance men or women in your life, you are truly blessed.  We all have our share of drainers.  Oh, and one more thing………he does it all with a prosthetic leg.  Be inspired.  Thanks for reading.

One thought on “The “Renaissance” Man”