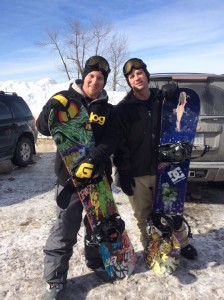 The Burton U.S. Open Qualifier for the best snowboarders in the country is at my home area of Seven Springs this weekend. Coupled by the excitement of the half-pipe,boardercross, and the slopestyle events in the upcoming Olympics in Sochi, Snowboarding is definitely on the international radar screen of winter sports in this country and around the world. I was riding up the chair the other day with a guy in his 20s who said that he had been riding a snowboard for 18 years. I remarked to him how mainstream snowboarding had become. I have been a life long skier but have seen the development of snowsports in this country include snowboards, twin tipped skis, half pipes, snowboard parks, and even the ski schools have been renamed Snowsports Schools. Hey- we all are playing in the same sandbox now and no matter how you choose to slide down a hill, the joy of winter sports can be enjoyed in many different ways and expressions.

It has been a tough slide uphill for the boarders up until now. A lot of skiers had questions and animosities towards these new guys who had the baggy clothes, boards and a bit of an attitude in the early days because they were trying to break into the old boys club on the slopes. I was not the only one to witness boarders getting into it with old guys as they entered the lifts and exited the lifts. Lots of bad feelings because of the mis-understandings between boarders and skiers. There are a few areas who still ban snowboards from the slopes but that is being challenged on a daily basis. The pure unvarnished truth is that snowboarding saved the ski industry. Skier visits have remained flat in recent years and if the winters were soft in a particular area of the country, clothing and equipment sales were down. Snowboarding revitalized the industry with sales of new boards and the funky clothing that is indiginous to the young crowd who tend to participate. Lots of those younger generation boarders are now sporting the gray hairs but still ride enthusiastically along with the next generation. I have not seen as many of the confrontations as in the old days, but some of that outlaw mentality does still exist.

I am obviously fine with the boarders and all the clothing, equipment, swagger, etc, that showcases the younger generation. What I would like to point out is that we all have a responsibility to each other when we go sliding down a mountain as fellow showsports enthusiasts. I grew up with the Skier’s Responsibility Code which outlined among many things, that the downhill skier has the right of way and that a skier must be under control at all times. We have all seen out of control skiers over the years and the hope has always been that the ski patrol or rangers deal with that dangerous situation. I also remember my wife being frightened when a straightlining snowboarder came up behind her and screamed “Get out of the way” even though she was clearly the downhill skier. I still see boarders and skiers come into a lift line “hot” and lose their edge or edges and take out a person standing in line at the knees. My friend in Colorado is still recovering from an out of control boarder who hit him in the lift line and blew out his ACL. All he was doing was standing in line and “BAM” cleaned out at the knees. Hey- it happens with boarders and skiers and it is time that the areas and the skiers and boarders who are experienced, take up the cause of educating their fellow enthusiasts and enlightening them on the Responsibility Code. It really should be called the Snowsports Responsibility Code. If we all are playing in the same sandbox then we all must abide by the same rules. If an experienced boarder sees bad form on the slopes by a fellow boarder, take the time to get him or her aside and tell them in a nice way that they have to be responsible out there. Same with skiers. I have had many conversations with skiers and boarders alike who have cleaned out one of my visually impaired skiers and just ridden or skied away. I often say, I could put a neon billboard on our blind skiers and some of these yahoos still would not see them, much less care about hitting them. Not good form at all. So take the time to make sure that it is safe out there and be responsible. Skiers are learning how boarders make turns and can steer out of their paths if needed. Boarders also must be cogniscent of where the skier is below them and respect their space and not mark a path and ride it come hell or highwater. And we all must be in control when we get close to a lift line. We don’t want to come in too “hot” and take out an unsuspecting skier or boarder in line or worse yet a little child.

So, the point of all of this is, we all are together now. Boarders, skiers, twin tippers, blade skiers, whatever gets you down the mountain. It’s all cool and we all must have fun but we all must be responsible. We have to care about the guy or gal downhill and in the line. And no cause to get ugly in the lift line either. We all are adults and can have a conversation without confrontation. Enjoy the boarding and skiing events on the Olympics in the coming weeks. I can’t wait. Thanks for reading and think snow. Thanks to the two guys in the parking lot who graciously posed for the post picture. They were cool and wanted to know more about the Chronicles. I hope they are followers now. Nice Guys!! One last thing, if you can’t get my pictures on your pad, I-phone, etc, just click on the title and the whole article and pictures show up. USA, USA, USA, ………

7 thoughts on “The Mainstreaming of Snowboarding”