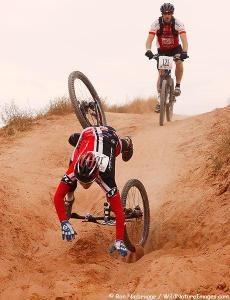 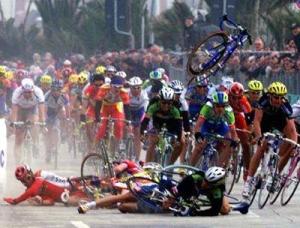 My friend Bob Reading broke his brand new Specialized helmet a couple of weeks ago when he crashed on his mountain bike up at Rothrock State Forest in State College, Pa. A couple of weeks later, he went down twice on his road bike near his home in Florida. His lovely wife Valerie provided us all with pictures of his road rash which brought back a lot of memories for me and they are not too pleasant. Bob is one of the nicest guys you will ever meet and a very fit and talented rider. But things happen on a bike sometimes that just sneak up on you. John Howard, who was on the U.S Cycling Team and the first winner of the Race Across America says there are two types of bike racers or cyclists for that matter. Those who have crashed and those who will. It happens and when you are the 58 year old kid like me, you ride to ride another day.

That was not always the case. When I used to ride in criteriums, which were an accident waiting to happen on a tight course with a lot of riders, the slightest mishap like a touched wheel, a rider hitting the brakes in a corner, or someone who had not glued his tubular tires correctly on a rim resulted in riders going down. I had my share of being in the wrong place at the wrong time and went skidding across the course getting that all too familiar road rash on my legs and hip. I sailed over a haybale in a corner in a crit in Parkersburg, WV. and ended up in a mall parking lot dazed and confused. I was fortunate not to break the collarbone which was a common cycling accident. My friend Art Bonavoglia was not so lucky as he did it during a contested sprint. I witnessed another friend George Sagan go skidding under the announcers stand at the Vet Nationals one year. I rode a criterium in the rain one year in New Jersey and there was a huge crash where I was forced up onto the sidewalk, made it around the crash and ended up in front with a bunch of Jersey guys who would take you down for a $5.00 prime.(lap prize). I stayed out of their way and was happy to finish in one piece.

Road races had the same issues and you always tried to stay as close to the front as possible to avoid any crashes. But sometimes you just could not avoid problems due to weather or the careless riding of those in the pack. One race, we had to finish the sprint going over a railroad track. Guys who didn’t research the course didn’t know about the track at the end and had issues when at top speed they went across the track carelessly and went down hard. Another crazy race, the promoters handed out index cards with places written on them. Guys were diving to get the cards and taking riders down right and left. When you are younger, you think you are invincible and do some dumb things on a bicycle. My friend Eric and I went from the entrance of Killington, Vermont to Woodstock in a 60 MPH descent. I did think what could happen if the front tire blew, but I was committed and escaped an issue successfully at the bottom of the mountain. I had a similar experience coming down County Line Road up near Seven Springs Resort when I raced Reggie Zipko down the road to his house. Anything could have happened on that road and I was not too smart with that antic. I remember another time on a ride in Pittsburgh with a bunch of guys when I followed a garbage truck down a hill and into the left turning lane to Forbes Avenue. Much to my chagrin, the truck was leaking grease and as I made the left turn, the back wheel skidded on the grease and I went sailing through the intersection and landed in some hedges in front of a gas station. The grease cushioned the slide a bit but I still ended up with the nasty rash and a painful ride home.

These days I ride to ride another day for sure. One of the things you learn from experience is that you just don’t rally back as quickly when you are older. You have to back off that throttle a bit and know that you don’t have to fly down that hill, ride up over that big log or obstacle, to prove you can still hang. Use the ride for fitness because the days of being competitive are really over. Again, things can sneak up on you and you can’t help the crashes sometimes. But if you can ride with a little more caution and use your experience on the bike, you can stay upright in most situations. I think a rider as skilled as Bob Reading has had enough falls for a while. He will also ride to ride another day. But like John Howard says, the crash will happen to all of us. Lets just hope as the years go on that we are spared anything traumatic. Look ahead, ride smart in a pack, and let caution be your guide. Then we all can be the 60 year old kid riding for fitness someday. Thanks for reading. Be safe out there.

10 thoughts on “Cyclists- those that have crashed and those that will.”