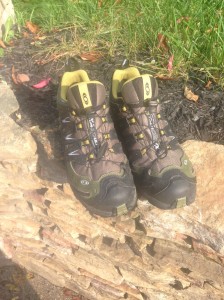 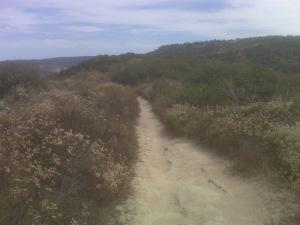 So, I am out on Monday early with my headlamp, rain jacket, shorts and new trail shoes (
Solomon XA Pro 3D Ultra 2), and rain hat. It is pouring and I am kind of a slow starter when I run, so I like to warm up which is good advice for those of you like the 58 year old kid. I am watching out for slippery rock and leaf strewn areas along with wet roots which can play havoc with your stride in the woods and make for a potential header on the trail. As I mosey along, I am feeling better as a half hour passes and the stride becomes a little stronger and the pace a little faster and as is the usual case, I feel pretty good and loose after about 40 minutes. But I don’t usually run much longer than that-maybe an hour at best but it is one of the most relaxing and enjoyable workouts I do in the off season. This time of year, the days grow short and most often you need a light. You can get these on line or pick up a Petzl light at Dick’s or REI. They are easily found and are battery operated so have some double A’s in your glovebox. Good shoes are essential and the Solomons can be found for a pretty good price at Amazon. Foul weather gear is good and there are lots of choices for running jackets because you don’t need more than a polypropylene long sleeve running shirt, decent waterproof jacket with a hood, wool hat or baseball cap, and good wool socks. I wear shorts most of the time because I don’t like to be over dressed even in snowy conditions. A lot of guys my age complain about running on hard surfaces. That is the nice thing about running trails, they are more forgiving but you need to pay attention to obstacles.

I always ran, but was looking for an alternative to cycling in the really foul weather because I like to be outside. Years ago, I ran into Jack McArdle on the trails one night while we were cross country skiing in the dark with our lights on. He told me about his group that meets weeknights and on Saturday mornings to run trails. Now Jack knows most of the trails in our local North Park by heart and as the Pied Piper of trail running, he assembled a neat group of folks from all walks of life to follow him on the trail runs. The school teachers who tended to be a little left of center had great conversations with the business types who tended to be a little right of center and we all had a lot of laughs and solved the world’s problems out on those trails. When someone complained about the route, Jack would assign a “penalty hill” and we all would moan but laugh as we suffered up some mud encrusted slime hill for our penance. Those days have faded but there is still a trail group out there with some of the original members still running and doing the penalty hills.

As for me, I try to ride most of the year with my lights on the mountain bike. But there is the time of the year when the trails get so slimy and icy, the weather gets so foul that it is really not enjoyable to ride. That is where the run really amps up the possibilities for me. The great thing about running trails is that you can do it anywhere. When I travel, and I can’t ride my bike, I take my trail shoes, Google the local trail system and go out and do it! I can also find golf courses. I have utilized the Manassas Battlefield trails as well as the Yale University Golf Course. It has to be early there or at night because I have been bounced off that venue more times than not. But usually you can run golf courses in the off hours and there are always trails or a trail system in every town and city in America. Runnning on the road is tough on the knees anymore and the viable alternative is running golf courses or trails. This time of year with the leaves changing and the weather cooling off, it is a great alternative to cycling if you feel like doing some cross training or another physical activity.

Running trails is also kind of primal in a way. We have running in our DNA as our early ancestors ran to hunt food, or ran so as not to be food. I think of the Native American warriors in the woods in Pa. where I run. I can envision their lifestyle of hunting and gathering while running paths that are hundreds of years in the making. It is neat to smell a fireplace burning, see the changing leaves, or run in a light snow with the muffled sounds of civilization fading with each inch of snow on the ground. Trail shoes have lugs and are good in the snow and ice. They can be used with snowshoes in the winter to continue to enjoy the trails even when several inches of snow builds up. No cars, good scenery, peaceful contemplative running, even at night. I never complain about the time change, colder weather( I am a skier you know), freezing rain, rain, darkness, solitude in the winter because I know that the recipie for a potential depressing day is to go out and run when and where most people would not venture. Those of you who are looking to avoid the road running and fearing the wear and tear as well as the danger of running on a road at night- look to the trails. Those of you who are looking for an alternative to the boring regime of the gym and some fresh air as an alternative- look to the trails. You don’t have to start with running either. Buy the gear and start out slow by hiking or walking. Build up to the run. Rome was not built in a day and neither should you feel the pressure of trying to run when you can build up to it by hiking and getting used to being on trails out in the woods. Test your footing and become comfortable with the obstacles and working out at night with the lights. Trust me, you will like it and anytime the weather turns bad, you won’t have an excuse. Even if the weather is good, look for the alternative. You probably won’t get a penalty hill unless you run into Jack and Mare out in North Park. Thanks for reading and go to the trails my friend.

3 thoughts on “Trail Running- Peace in the Woods”