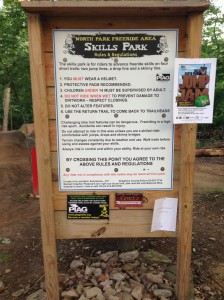 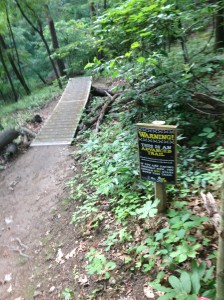 When I first started to ride our local trails in North Park( an Allegheny County facility), our little band of outlaws were seen as interlopers on a trail system intended for use other than mountain bikes. The year was 1987 and the county police were anything but supportive, especially when we rode the trails at night. Couple this negative feeling with the attitude of the equestrian community and you have a situation that is not favorable to bringing on trail use for the new mountain bike community starting to grow in the Western Pa. area. We were not welcomed and as polite as we were to the police and the horse riding community, the negative feelings and the sense of entitlement to these trails was quite obvious despite our efforts to educate both entities.

Fast forward- Y-2K brings on a bigger mountain bike community coupled with an enthusiastic county executive who wanted to ride trails and now we have a voice in county government who understands that the trails can be multi-use and that the equestrian community and the hiking and mountain bike community can get along and expand the 12 mile system in the park. PTAG (Pittsburgh Trail Advocacy Group) came into the picture and began to enlist help to develop the trail system and worked cooperatively with the county to design and expand the existing network.. 12 miles became 15. 15 became 20 and soon more and more riders were coming to North Park and were assisting PTAG on trail work days. Cycling awareness in our area only enhanced the efforts of PTAG and along with weekly rides( like our Tuesday Night Rides) became the norm and trail use expanded greatly. This continued effort has expanded our trail system to its current 42 miles. An astounding feat in such a short time. I recently rode with Maurice Tierney, the founder of Dirt Rag Magazine( the quintessential mountain bike periodical), who is currently residing in the Bay Area. I remarked on our ride how wonderful it must be to ride in an area where mountain biking was founded back in the 70s. Maurice answered that the hiking community out there have virtually shut down the trails for multi use and until that old guard of hikers fades away, the current situation in Marin County is a bit bleak. Maurice went on to say that we really don’t know how fortunate we are to have our trail system and that it is one of the finest systems in the country. This guy rides everywhere and he knows what he is talking about. Due to cooperation with county government and sweat equity by the mountain bike community in Western Pa and PTAG influence,our system is a model for county and state government accross the country.
A few years ago, this expansion continued with the vision of some individuals like Bill Kirk, Dave Brunger, Dave Biber and a host of other free riders who constructed a free ride downhill trail and a freeride park within our local North Park trail system. Never in my wildest dreams did I ever think I would see the day when kids would be jumping and using the berms and ladders on a facility in North Park. To see guys in pads, downhill bikes and full face helmets using the Dr. J Dowhill trail regularly during the spring, summer and fall, is a testament to hard work, a vision and cooperation between a local band of riders and the county government. I have included a few pictures of these facilities in my post above and they do not do justice to the quality of work that went into these trails. Bill Kirk and Dave Brunger are always hosting rides and events that showcase this facility and should be applauded by the national mountain bike community for their tireless efforts.

So when you read in periodicals about the issues between user groups, one only has to look to the 42 miles of cross country trails that are used by hikers, mountain bike riders and equestrians without any ill feelings. We have come a long way in our neck of the woods from those early days when we had to turn off our lights and hide from the police, apologize and try to reason with the horse community, and work with hikers on expanding the small trail network. I am happy that I have seen it and I am happy that I have a local, high quality trail system to ride regularly only 10 minutes from my front door. Come out and ride with us. Thanks for reading.

8 thoughts on “The North Park Trail System- a lesson in cooperation.”