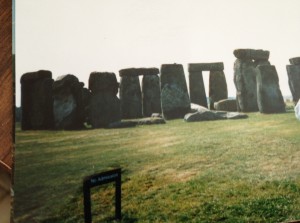 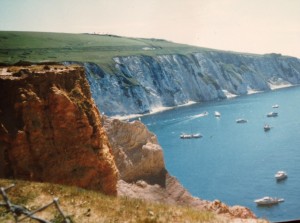 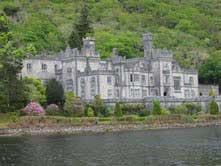 One of the most gentile things you can do in England or anywhere for that matter is to have “high tea” or “cream tea” as they say in England. Imagine a sweat hog like me coming in after a great day of riding in the English countryside and inhaling the delicious bisquits, clotted cream and strawberry preserves in front of a refined and proper server at a fine establishment. Even though I was outside, the silver service and the delectables were in contrast to my perspiring and un- refined appearance. But boy, was it good and when I remarked to the server how absolutely scrumptious the bisquits and clotted cream were, she said,” Where are you from ……the moon?” The English have a way of not making you absolutely comfortable and I quickly paid the server, took a picture of the fine china and silver, and went on my merry way back to the hotel.

Cycling in England is an interesting experience. Like anywhere in the British Isles, you are on the left hand side of the road which makes crossing the street daydreaming a harrowing experience. However, like hanging, you get used to it and you make your way to some of the most historic sights on earth. I particularly liked the cathedrals that I rode to in Salisbury, Winchester, Westminster, and others. When you arrive at a cathedral at 4:00PM, you are treated to Evensong which is the late afternoon choir servcice where they let you sit right in with the choir to hear the beautiful choral pieces in the midst of fantastic and angelic voices. I made sure to take a shower before I went to Evensong because you are literally right with the choir as they make the cathedrals echo with heavenly music. The graveyards are actually humorous. It is not unusual to see headstones with interesting inscriptions like,” Here Lyes Dan Brown, once was living but now in the ground, although it is sad, his wyfe was mad, and Dan was befelled with a pan that was round.” Curious how you could spend your afternoon with your bike parked at a fence and laughing at the headstones of an English graveyard. Historic landmarks in our country are 250 years old.In contrast,I saw the Magna Carta the foundation for our legal system which dates back almost a thousand years. The castles are filled with interesting historic pieces like Henry the Eighth’s suit of armour in Windsor Castle. Amazing to see.

Riding a bicycle is definitely the way to see a country as you have seen from my last several posts. England was no different as I pedaled to a ferry that took me out to a days ride on the Isle of Wight. I saw the White Cliffs of Dover, and made my way to Stonehenge. How the Druids or space creatures ever stacked those thousand pound stones will always mystify me. The cottages in the English countryside are spectacular with the lattice work on the side of the house filled with the most beautiful roses. The pubs are fun with merriment and delicous ales although at a temperature that was a little warm for me. They claim that it makes the beer taste better when it is a little warmer but I thought I could make some real money selling ice machines in England and Ireland. Nothing like a cold beer to me but that is the ugly American coming out.

Most of my riding was in the country side but one day, I went in early to London. I was like a Whack a Mole in that I rode the underground and popped up at the tourist sights. Up out of the hole- Buckingham Palace-picture- check- back down in the hole. Pop out- the Tower of London- check out the Crown Jewels- check- take a picture, back down in the hole. Pop out again- go see the London Symphony -check- culture enhanced, back down in the hole. By the end of the day, I took the last train out with all of the punk rockers. I was definitely the Howdy Dooodie of the group but the multicolored mohawks, and piercings, were a little over the edge for me, as was the cockney accent which is tough to decifer when you are on a moving train full of reprobates. All in all, a quick view in one day of a marvelous city which I need to see again some time. Perhaps a couple of weeks would do it justice- not one Whack a Mole Day.

This was my last European cycle trip and I am hoping that as life moves on here a little bit and things start to slow down, perhaps Janet and I can take some other trips to distant lands and enjoy the people, the countryside, the historic sights, and the culture. I may be on the back nine, but I am not finished yet. Carpe Deium. Thanks for reading.