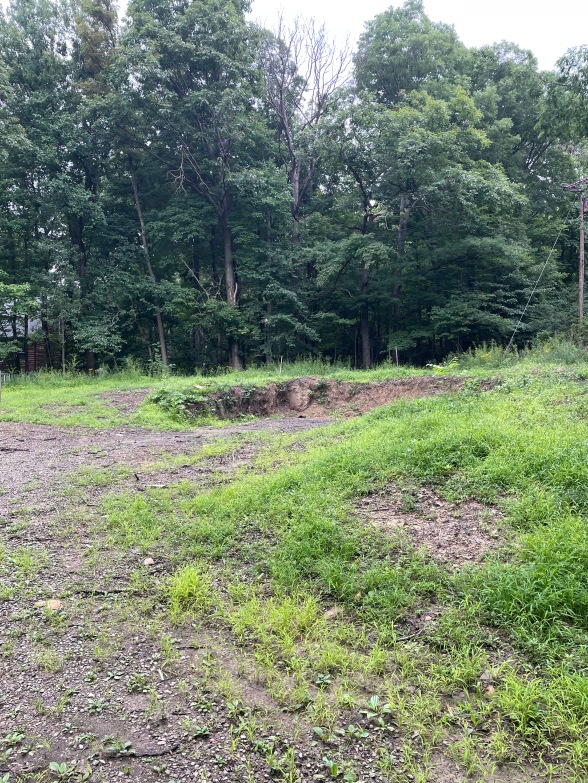 So, I was on a mountain bike ride with my pal Steve Gurtner the other day and he said, ” did you hear they tore the cabin down on County Line Road?” I said- “Dixon’s ?” He said yes. “nothing but a big old hole in the ground now” I was a little shocked and took a drive over to see for myself. Sure enough. A big old hole in the ground where once stood the Rich’s cabin or as my dad used to call it…..” The Dixon Hilton.”

The cabin had come into some neglect and disrepair in the last number of years and my childhood friend Dixon Rich said that it was time for it to come down. Dixon bought the cabin from his folks a while back and as the years went on, it didn’t get much use and was becoming a liability. So Dixon sold the property to some friends who will build a new place. As I stared at the hole in the ground, lots of memories came rushing back to me from my childhood weekends in the cabin near Seven Springs Resort where we all skied as kids

I grew up with Dixon Rich and we have been friends since the minor league in baseball. His dad bought the cabin a long time ago and every weekend, Bob Rose used to take all of us kids up in the station wagon to spend the weekends at the Rich cabin. Sleeping bags all over the floors were common and the bunk beds were filled as well. Usually it was either Sally and Bob Rose, Barley and Dixon Rich Sr., or Ted and Mary Struk who had the chaperone duties and cooking detail to keep all of the neighbor kids from the Berkley Hills area fed and in line. That was the standard weekend in the winter for all of us thanks to the generosity of Dixon Rich Sr. who got the place for all of us to enjoy. I couldn’t wait for the phone to ring on a Friday afternoon when Bob Rose Sr. would call and say- ” 15 minutes- be ready and have all your gear ready.” We would ski Friday nights until 11:00, all day Saturday, Saturday night, and all day Sunday until we would pack up and head back to the burg. That is where we all really learned to ski at Seven Springs, and spending our nights at the cabin on County Line Road. For years!!!!

As the years went on, kids became teen agers and there were all kinds of cars in the driveway. The key to the cabin was always on the top of the entry door and the only rule was before you left, you better put the key back where it belonged. If those walls could talk, you would hear some tall tales from that cabin with all of those raging hormones and visitors coming from near and far to ski weekends with the Berkeley Hills crowd. The parents would still show up from time to time but their git up and go for us had gone up and left as they aged a bit. The Dixon Hilton was party central for many of us growing up on weekends in the Laurel Highlands. Dix and I got into mountain biking around the same time and we used the cabin as a meeting place for our growing number of riding friends. It was cool to have a place to stay and hang out after a big ride from the cabin, over to Hidden Valley and back again. Dixon and I would also take mega rides to Ohiopyle and often get lost on the way back. We relied on the sunset to give us direction and if it got too late, the kindly neighbors from Indian Head would give us a ride back up the hill to the cabin where we were completely exhausted. When they had the NORBA National Mountain Bike series at Seven Springs, Dixon and I raced in our category, and then watched the national class races. The whos who of mountain bike racing came to Seven Springs in those days and somehow they all heard of the parties at the cabin on County Line Road. It was not uncommon to see luminaries of the mountain bike world show up in Dixon’s yard. Maurice and Elaine Tierney of Dirt Rag Magazine, Sue Haywood, Kurt Vooreis, and even Gary Fisher graced the grounds of the Dixon Hilton. The cabin became the meeting place for rides and the after ride festivities for years and it became our little year round resort.

Time flew by and our little band of neighbor kids spread out all over the country. The cabin didn’t get much use in recent years and one time Dixon was staying there and he called me on the phone. ” Hey Patrick, you wouldn’t believe it. I was sleeping and at about 3:00 AM the deck fell off.” ” I didn’t know you had to shovel snow off the deck to relieve the weight.” ” All of a sudden it was gone” We both had a good laugh about that one along with some other good memories.

I talked to Dixon the other day and he told me about the sale. I asked him if he kept some memorabilia from the cabin and he said that he had, including the valued pair of Jet Stix. We both laughed and said most people would not even know what they were. For you younger folks- google Jet Stix. Also- he said he kept the flashing yellow light that they used to alert people coming up County Line that the cabin was open and people were there.

Looking at this hole in the ground, I will miss the old days. But I will always be grateful to the Rich’s, the Roses and the Struks ,and my parents, for their investment in the kids in the neighborhood. That cabin was our home in the winter and I could not think of a better way to grow up. I am still skiing sixty years later and my enthusiasm has not waned one bit. That love of the sport was ingrained in us as kids and I will always be thankful for the cabin on County Line Road. Thanks for reading.