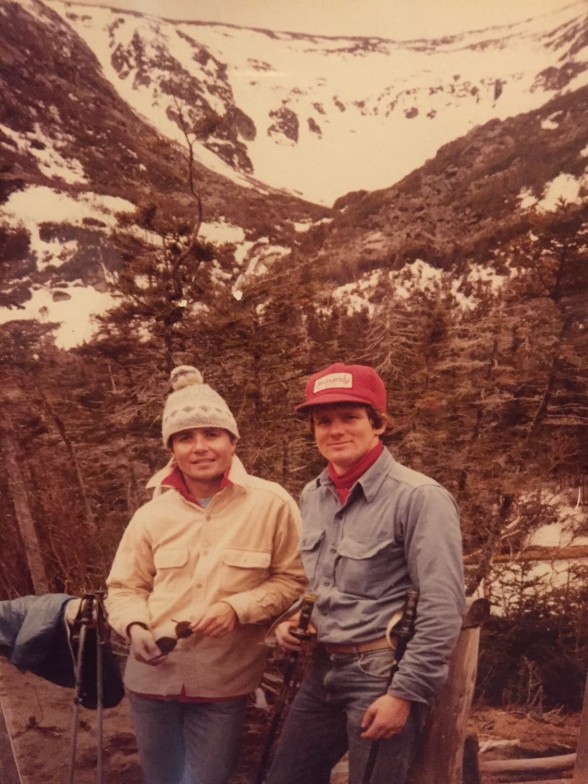 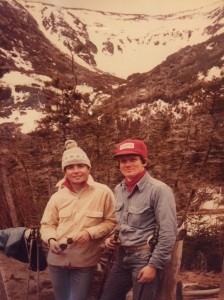 This is a picture of my friend Eric Durfee and me back in the day at Tuckerman Ravine. We used to ski and camp there a lot and although there was enough adventure for the both of us up there with changing conditions and falling ice chunks the size of Volkswagens, we never had an injury while skiing there. Back home after one of those epic trips, I was walking by the tennis courts in our county park, stepped on a tennis ball and broke my foot. People asked me,” Pat – did you do that on your ski trip?” I responded in the negative and told the rather boring tale of the tennis ball. You see,most injuries I have ever had in my life have been mundane, boring circumstances which is how most people get hurt anyhow. Not paying attention, in a hurry and things happen.

Interestingly my friend Eric and I were talking the other day about my recent severed tendon in my hand which was done in a hurry shoving my bike in my Jeep. We recounted our past tales of injuries. Like when Eric rode the Tour of Cayuga Lake 90 mile road bicycle race with a cast on his hand fitted to the bike handlebars. I chimed in with my similar tale of skiing with a wrist cast molded to fit my ski pole. I finished a Utah trip skiing like that. I also told him about my time when I skied for 6 weeks in the winter on my left ski only. I broke a bone in my right foot and fitted the cast into a moon boot with a lot of padding. Skied most of that winter on my left ski which in the long run was good for my skiing. It made my right turns as strong as my left turns when I returned to skiing with both skis.

But my friend Eric takes the cake though when he reminded me of the time we skied Dodge’s Drop up at Tuckerman Ravine.

We did not obey his old ski coaches edict(Joel Bostick from Cornell), which stated that you should never ski anything in Tuckerman without climbing up first to have a look. It was a foggy, dreary day and we found ourselves at the top of Dodge’s and decided to go for it even though we had not seen what it looked like from the bottom. We got about a third of the way down when we came upon a frozen waterfall. The dilemma was before us as to how to navigate this. I basically put my skis horizontal to the slope and slid down the waterfall sideways on my rear end- or right cheek basically, until I reached the snow again. A shaky move but I pulled it off. Eric had the more heroic move by placing his tips and tails between two rocks, balancing himself, and then jumping straight up into the air,turning downhill, and straight-lining until he reached a comfortable spot on the snow. The amazing thing is that he did all of this with a fiberglass wrist cast. Two skis, one pole.

As we sat at HOJOs having a beer later in the day, on the deck, we saw that our tracks were the only tracks in Dodge’s that day and the deck conversation with some guys was focused on ” those two guys” who skied Dodge’s that day with the frozen waterfall and all. We smiled as we drank our beer. 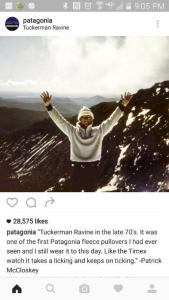 I guess one would either call this behavior of ours foolhardy or fanatical. But either way, I am doing it again next week when I head to Colorado with Eric and our other guys from our annual trip together. Dr.J sewed me back together and I am in the fast rehabilitation mode. The rehab folks made me a small spint 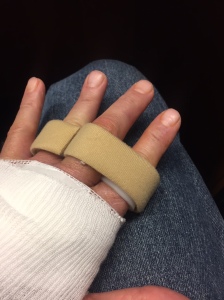 which I will wear under a mitten fashioned so that I can hold a ski pole and all will be well in my mind. Jackie, Anita and Lisa,my rehab therapists, don’t quite agree and said I better be careful. They said it usually takes a little more time for the tendon to repair.They are very professional and care for their patients at the UPMC Lemieux Sports Center, but they have not come into contact with a nut job like me before.

Wait- what am I saying? They repair hockey players for crying out loud! Once again, I will be playing hurt but do you know what? I will be playing. I can’t thank Dr. Jamie enough and his UPMC staff for the great repair job. I have had a good season so far, injury free, but this little blip on the radar screen will make it interesting on my last turns of the season. Eric and I are used to playing hurt. He in particular with shoulder injuries, neck injuries, and a host of others in the last 6 years that had him playing – but playing hurt. This year he is skiing like he did 30 years ago, injury free and totally healed. He deserves this season for sure and I can’t kick. I have been very fortunate in the injury department. Enjoy the rest of your winter, spring is around the corner. Thanks for reading.