I learn something new every ski season. I like to think other people do as well like my buddy Bill Yalch, seen here with his eyes closed. He and Brady Cunningham asked me how to smooth out their turns and I gave them a tip that always works that basically says…”don’t be in a hurry to finish the turn and engage the new downhill edge early and ride it out- flexing the ankles along the way”. Ankles are the key. I followed them down the trails at Arapaho Basin and called out when to engage the edge and when to flex the ankle. They did it and were very happy. John and Richard Nicolette are two childhood friends of mine who are great skiers. They ski in a very efficient, traditional way, but were interested in the new method of engaging edges and widening their stance. Bottom line- good skiers like Richard and John get it done for sure, but there is always something to be learned with new technique.

Fast forward a day and I made my way to Reno to meet up with our annual gathering of F.O.E.D.( Friends of Eric Durfee). 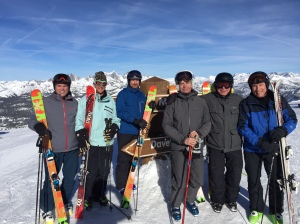 This group comes from all over the country to ski with Eric due to his generosity and we all represent different phases of his life. Mark Hutchinson and Proctor Reid are his childhood friends from Vermont. Hutch was a race coach at Stowe and coached Erik Schlopy who was a U.S. Ski Team member. Proctor raced with them as juniors and eventually raced for Dartmouth. John Ingwersen and Bart Smith raced for Cornell with Eric, and I came on the scene after Eric was married to my friend Helen from Seven Springs. This group skis hard and for a bunch of 60+ guys, we go from the first chair to the last chair. This year we had a little addition to our usual hard core gathering. My friend Jeff Mihalsky, a snowboarder- splitboarder to be exact( he has great prowess in the back country), came up from Sacramento to ski with us at Mt. Rose. It was funny- he kept calling us “old dudes” but we all learned a bit about snowboarding and my friend Eric said no doubt that snowboarding saved the ski industry. It was a great vision to see a bunch of old hard core skiers having a blast with a young snowboarder. We all get down the hill hard and fast and it was a great day and a mutual learning experience. 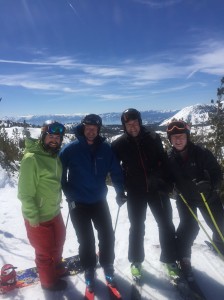 So one day at Mammoth, Eric says to Hutch ( a seasoned PSIA Ski Instructor as well as race coach), ” Hutch- give us all a tip for us to work on this trip.” He thought about it for a while and after telling me to lower my center of gravity and look more ahead, telling Eric and Ing to follow the turns with their center of mass instead of being so countered in the typical race position, and telling Proctor practically nothing because he bends the skis so well and gets them out from under his body that there isn’t much improvement there. We all learned something from those suggestions and even though we all are seasoned skiers, we all can learn something every season. Thanks Hutch. 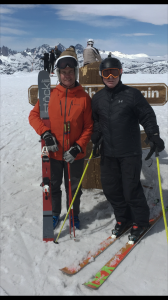 After a series of shoulder surgeries, hip replacements, and other corrected maladies with this group, the skiing is still pretty high level and I asked Eric how long did he think we could pound it like this. He remarked that as long as nothing catastrophic happened, he didn’t see any reason why we wouldn’t have at least another ten years of high level skiing. That is the premise behind one of my favorite books,” Younger Next Year” by Chris Crowley. Keep doing what you enjoy, stay in shape, and don’t let anyone tell you that you are too old. Chris is now in his eighties and skis and rides a bike everyday……everyday!!

I actually get a little depressed at the end of the ski season. I think about the year and how much fun it is to rip GS turns on a perfectly groomed slope. The thrill of skiing the steeps with the chalky smooth snow peeling from beneath my sharpened edges.

The sun, the mountains, and the ability and the opportunity to enjoy them is something I treasure with my friends. As I nodded off on the plane after looking at the Rockies one last time this season, I daydreamed about the year and the laughs, the learnings, the fun, and the benefits of skiing. From the Laurel Highlands, to the Adirondacks, to the Rockies, to the Sierras, this season has been fun. Skiing is a lifetime sport and as we all move into another season, we have our motto…..” Younger Next Year”. Thanks Eric, Ing, Proctor, Bart, Richard, John, Bill, Brian U, McClean,Jeff L, Porter, John, Tim, Monty, Alan,Tom, Chris, Judy, Mike,Mike S, and my lovely wife and Holimont ski pal Janet, for a great 2016-2017 season. Thanks for reading and now it’s time to haul out the mountain bike.

10 thoughts on “Younger Next Year”